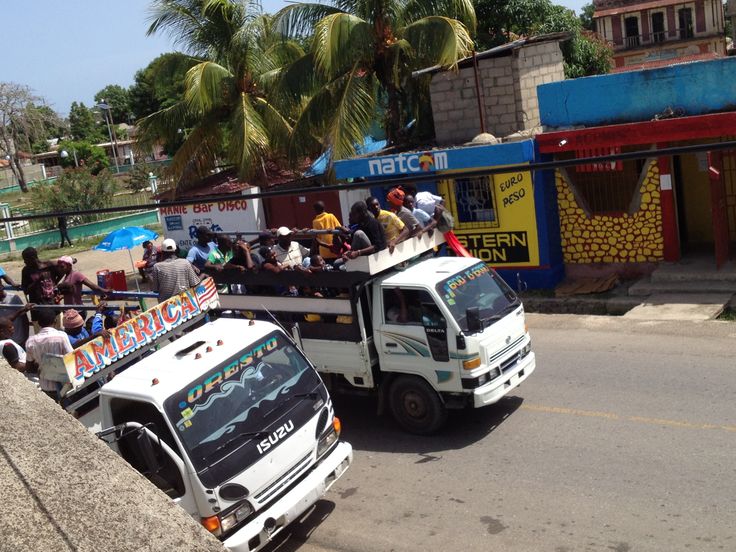 Terrier-Rouge (Haitian Creole: Tèrye Wouj) (English: Red Terrier) is a commune located in the Nord-Est Department in Haiti in the Trou-du-Nord Arrondissement.

Terrier-Rouge (Engilsh: Red Terrier), the "City of Mechanical Garages", is a third order administrative division. This commune brings together two communal sections and a district. It is an interior commune, its dominant terrain is the plain and its climate is normal. Its inhabitants are called (Terrier-Rougiens {nnes}). For an area of 1.5 km2, its urban section, Ville de Terrier-Rouge, has a density of 10,165 inhabitants per square kilometer.

Economical activities are summarized in the commune of Terrier-Rouge as agriculture, livestock, fishing and trade.

Although the establishment of the Dauphin company has, in the 40s, practically curbed subsistence farming for the benefit of industrial agriculture (intensive and exclusive planting sisal and rubber, systematic destruction of fruit trees, forest species and food crop), agriculture is still the main activity of this commune. In the section of Grand-Bassin, planters practice growing in association: beans, pigeon peas, peas unknown, peanuts, cassava, banana, rice, and both mountain and plain. Avocado and orange are among the most common fruit trees. These products are flowing well and farmers generate enough income to consider them as "cash crops".

The section of Fond-Blanc is practically divided into two zones of cultures: the side adjoining the village of Terrier-Rouge, reserved for fruit trees (mango trees, avocado trees, highly marketable orange trees), and the other part including Paulette, Phaéton and Dérac, where industrial agriculture is developing and the exploitation of bayahonde exists for the production of coal. In general, the products are sold to markets in the center of Terrier-Rouge, the neighboring communes of Perches, Trou-du-Nord, Limonade and along the roads.

It remains a complementary and safe economic contribution for Terrier-Rouge growers. They all have a goat or oxen that they do not raise in managed pastures, but freely on their farms. Very often, old sisal plantations take the place of grazing pastures. Cattle, goats, horses, pigs and poultry make up the bulk of their livestock. The breeders face many difficulties related to: lack of food (fodder) and water for their animals, lack of veterinary care, lack of training and ignorance of available improved methods of breeding.

It is also practiced on the coast of Paulette and in the hill lakes, but it has multiple constraints so that it yields less than the previous two activities to those who indulge in it.

After agriculture and livestock, commerce occupies a large part of the population. It is the privileged sector of women. Monday, market day, the flow of people from all over the commune and neighboring communities is impressive. No less impressive is the volume of agricultural products, also from the commune and its surroundings, including increased essential items, building materials, crates, and cereals etc. from Santo Domingo that are also stocked in this big market.

The development of this sector is also strongly affected by the state of the pathways. The delivery of food is more or less difficult depending on the period. But, despite everything, trade remains vital to the local economy and to the survival of some families who find income supplement often low, but useful.

The economic and financial infrastructure includes a hotel, four restaurants, a Caisse-populaire and four marketing cooperatives.

The impact of the secondary sector is not very significant in the economic life of the municipality. We only a few peanut mills, cassava, maize and a rice mill in the section of Fond-Blanc. In addition, there are bakeries, small grocery stores, hairdressers, small restaurants, borlette banks, as well as a funeral home, food vendors, shoe polishers, and mechanic garages who offer their service informally to the population.

Mud and clay is used to construct homes. L'Ecole St and Clinique Esperence et Vie are among the few modern buildings in Terrier-Rouge. Few secondary and elementary schools are found here.

A non government organization called His Hands for Haiti supports children at Terrier-Rouge. L'eglise Baptiste de Terrier Rouge Parish oversees the children, the large number of people and the NGO

The lamentable state of its road network undoubtedly hampers the development of the municipality of Terrier-Rouge. This lack of road infrastructure has a negative impact on almost every other sector it hinders the smooth running. At the level of agriculture, for example, the production areas remain isolated compared to the main sales centers like Perches, Trou-du-Nord, Limonade, and Ouanaminthe. With regard to health and education, the difficulty of circulating from one point to the other of the town also causes serious trouble. Needless to point out how much this situation stifles any attempt to implement tourism development in this municipality.

The population of the municipality of Terrier-Rouge is served by two community health centers with beds (one in Grand Bassin plus one in the town center) and a dispensary in Phaeton. The medical staff consists of three nurses, 9 auxiliaries 12 health workers. Grand Bassin is home to the best-equipped medical center in the Northeast department, which even offers quality odontology service. In addition, at fixed points or at community meetings, a nurse from The HOPE Foundation provides vaccination, weighing, and pre / post natal care

With respect to water availability, Terrier-Rouge has two rivers, eight springs, and dozens of wells and public fountains with pumps. Only the urban section Terrier-Rouge is electrified, the frequency of feeding is 28 hours on average per week.

Formerly, the section of Fond-Blanc was supplied with water by an adduction system which became inoperative due to lack of good management and regular maintenance. The population supplies itself therefore from hand pumps or by resorting to the services of individuals. At Grand-Basin, water sources are used; water is also captured, stored in cisterns and still dispensed by means of hand pumps. But these are very precarious installations and the problem of water is posed in terms of quantity and quality.

Many of the recurrent diseases originate from the absorption of contaminated water: typhoid, diarrhea, intestinal parasites. Access to water by the bulk of the population remains a major problem; some see themselves indeed forced to travel for miles to collect the amount necessary for everyday use.

The municipality of Terrier-Rouge is almost devoid of electrical energy. HRE (Electricity of Haiti), charged in principle to provide it, has only a functional generator. According to the information gathered, the harm comes from farther away: the power grid itself is defective and the fuel not available. Traders and many other individuals are remedying this disadvantage by the use of generators and inverters

The Terrier Rouge road service does not exist because the municipal council, lack of financial resources and logistical means, can not ensure the operation. The garbage collection is not ensured, the village of Terrier-Rouge is transformed every day more like a trash can, especially around points of sale and public places. So, it is heartbreaking that the main public market serves as a rubbish dump site, in drainage canals, empty lots and streets. The decomposition of these filths releases odorous odors and dangerous toxins that are very detrimental to the health of the population and the environment.

At the level of administrative and judicial infrastructure, the commune of Terrier-Rouge has a police station, a peace court and a civil status office.

The State is represented at Terrier-Rouge by some deconcentrated institutions: MSPP, MARNDR, SNEP, EDH, DGI, PNH. All, or most, face logistical and financial problems. Some do not offer any services; others intervene only within the rather limited opportunities that they are given to act. Services as important as those of the post office or a slaughterhouse are nonexistent.

Nearly twenty eight churches or temples were counted in the commune. The number of Baptist churches is proving to be the highest, twelve in total, but the leading denomination of the region is Catholicism. Protestants and some others who practice various rituals and vodun spirits are also found.

This commune contains a telephone office with two cabins, a postal office and two radio stations.

As Leisure, the municipality has no library, no museum, no theatre nor cinema. Three types of sport, football (soccer), volleyball and basketball are practiced.

For monuments and sites, the municipality has mostly natural sites. It is not easy to access some of them, since the channels of communication in some places are largely lacking in the municipality.

The municipality of Terrier-Rouge receives an average annual rainfall of 885 mm (35 in) in the section of Fond-Blanc and 1000 mm (39 in.) in the wetter section of Grand-Bassin, zone of highest altitude and with better vegetation cover. In general, in Terrier-Rouge, it is wet from September to December; from April to June, it is rather dry. It is important to highlight the instability of the rainy season; this commune has experienced drought lasting up to 8 months. The average temperature is stabilizing around 29°C (84°F). The coldest month is February with 16°C (61°F) and the warmest is July with 32°C (90°F).

Man pulls up to church in a donkey; Terrier Rouge

Two very distinct types of soils are found at Terrier-Rouge: in the Grand-Bassin area, they are of sandy-clay texture, rich in organic matter and with a good agricultural potential. But in the lower part, on the Fond-Blanc side, they have a limo-clay texture. These soils come from decomposition of diorites and basalt.

The municipality of Terrier-Rouge does not have a large hydrographic network. There is a diversion from the Marion River in the Grand-Bassin section, and, in dry weather, it has such a low flow rate that one can not consider feeding an irrigation system from this water point. Paradoxically, Terrier-Rouge does has large groundwater reserves that allowed the construction of six hill lakes in the Fond-Blanc section to compensate for the lack of water.

The tree layer found in a part of the Fond-Blanc section, especially in the village of Terrier-Rouge, consists of interesting fruit species: avocados, mango, citrus, etc., and some forest species: eucalyptus, oak, mahogany.

The shrub layer in the areas of Paulette, Phaéton and Savane Carrée, is composed mainly of eucalyptus, bayahonde, candelabra and herbs that effectively protect the soil against erosion.

The lowlands of the Grand-Bassin section, which are generally rich and of excellent diversity, are the most wooded and humid areas.

The municipality of Terrier-Rouge is fairly well equipped in this area. The General Directorate of the Bureau of Mines and Energy (BME), there would be granodiorite in Grand Bassin, Douvray and Blondin. The Grand-Bassin ore, gray and speckled, is similar to industrial granite. Its only reserves are estimated at 6,000 m3 of surface blocks extending over an area of ​​4.5 acres. All deposits are of the order of 20,000 m3 of blocks for an area of ​​14 acres. As for copper, its presence was localized in the locales of Douvray and Blondin, about 6 km southeast of the commune of Terrier-Rouge. These are polymetallic deposits of "porphyry copper" type. The Douvray deposit covers an area of ​​80 acres, with a potential of 86,000,000 tons with an average grade of 0.53% copper. That of Blondin, located about 1 km east of Douvray, extends on 22 acres and can provide 50,000,000 tons to 0.5% copper.

It is important to note the existence of a quarry of white rocks and white earth in the area of Paulette.

Among its natural and other resources, the municipality of Terrier-Rouge offers various sites whose exploitation for tourism purposes would be an interesting source of income. Visitors would appreciate the exceptional panoramic view offered by the Deux Mamelles in Paulette's zone, and the Morne Gros-Louis. The ordeal on the Grand-Bassin side is also a tourist curiosity to which may be added the beach from Four la Chaux to Phaeton and many historical sites evoking the colonial era in Duray, Nappe, Goud, Bon Fon, Bouton and Maurice.

Terrier Rouge is home to many young orphans

Retrieved from "https://haiti.fandom.com/wiki/Terrier-Rouge?oldid=30022"
Community content is available under CC-BY-SA unless otherwise noted.