"A country that can't feed it's people is condemned to be the servant of others."
Ansi Vixima, Tèt Kole Ti Peyizan peasant movement.

Port-de-Paix (Kreyol: Podpè; English: Port of Peace) is capital of the Northwest Department and chief city of the Port-de-Paix Arrondissement.

Port-de-Paix is Haiti's fourth largest capital city and its tenth most populous city. French insurrectionists established the coastal metro area in 1665. The Port-de-Paix Arrondissement is made up of four communes: Port-de-Paix, Bassin-Bleu, Chansolme, and Tortuga Island. Tortuga Island and Port-de-Paix are Haiti's northernmost communes.

Port-de-Paix is a coastal city adjacent to Canal de la Tortue. Its shoreline extends in the shape of a crescent, from Petit-Fort, to the northeast near Morne-aux-Pères, to Grand-Fort to the northwest, nicknamed Valparayso, "Valley of delights". It depended on the ancient province of Marién.

The French Free Buccaneers, driven out of the island of Tortuga by the English and Spanish buccaneers, landed in the area in 1665. This was their second establishment on the great land. They found a rest without anxiety and called it "Port-de-Paix". In 1666, d'Ogeron planted cocoa trees found by Columbus on an island in Honduras Bay They flourished until 1716. In 1685, the governor made Port-de-Paix made the capital of the colony.

Port-de-Paix, chief place of the North West Department, was raised to the rank of commune in 1812. In the old days of the Spanish, this commune was called Valparaiso. After the departure of the Spaniards in favor of many changes that have taken place, it took the name of "Port-de-Paix" which it has preserved to this day.

The city was initially discovered in 1492 by Christopher Columbus, who called it Valparaiso. The French, who had settled Saint-Domingue during the 1600s, made Port-de-Paix its capital after they had been ousted from Tortuga Island by the British. In 1679 Port-de-Paix witnessed the initial black slave uprising, which was to last a decade.

• Under the regime of Pouancey, successor of Ogeron, in 1679, the first revolt of ebony slaves led by Padrejean, a Spanish black, broke out at Port-de-Paix. Port-de-Paix must be proud of having engendered this first spark of liberty. Unfortunately, this revolt was stifled by the buccaneers.

• In 1685, the buccaneers thought of transferring the seat of the colonial government to Port-de-Paix.

• In 1695, 6,000 English and French took possession of Port-de-Paix over the French. M. Ducasse, then governor, presented them with such a threatening attitude that they withdrew, but laden with booty.

• In 1772 a hurricane redecorated almost all the city, which nevertheless recovered with time, but it was ravaged again at the arrival of the Leclerc expedition in 1802, by the intrepid Maurepas, who defended it with a great deal of bravado.

• In 1793 during the proclamation of the general liberty of the slaves, the workshops of Port-de-Paix, as well as their products, were lost by the colonists.

• In February 1794, Governor Laveaux expelled the English, who blocked the city by sea, and the Spaniards on the ground: Withiloke, the English commander, seized and reached the Turtle Canal. It was time: the city was in the most terrible misery.

• It was at Port de Paix that Toussaint Louverture joined the French, and that he made his submission, in 1794, to Governor Laveaux, with 5,000 men, after having abandoned the Spanish. Laveaux received him with the greatest distinction, and appointed him general of brigade.

• While Toussaint's army was occupied fighting Riguad at Grand-Goâve, at the beginning of the civil war, in 1799. lieutenant colonel Golard raised the farmers of Port-de-Paix, Jean-Rabel, and Bombarde. Golard, at the head of several millions of men, came to attack the city or command Colonel Maurepas. The city was reduced in a few days to the last extremities. Maurepas exhibited the greatest courage, held an admirable course, and resisted on all points the incessant efforts of the insurgents. He made several happy outings. General Moise came to chase the insurgents.

• It was there that the valiant Colonel Rebecca shook the yoke of King Christophe in May 1807, at the head of the 9th regiment of infantry to submit to the Republic of Pétion, which resulted in the expedition of an army at Mole St. Nicolas under the orders of General Lamarre. To honor his memory, the Senate has paid a pension to the widow and mother of Jean Louis Rebecca.

• Its first church was covered in 1820. The cathedral was overthrown on September 23, 1887 during the earthquake. The population has returned to the task, and March 4, 1888 the first stone of the new cathedral was placed on the site of the old church reversed in 1842. A historical document here is the act of foundation filed under the stone in question.

By the 19th century, Port-de-Paix was prospering. However, in 1902 a fire broke out and raged through the city, completely demolishing it. Since that time, it has never made a full recovery.

• In August 1915, during the American occupation, the Cacos came in bands to plunder the city of Port de Paix, which they knew was disarmed. The inhabitants paid their dues and gave them a few hundred gourds to save their city from plunder. The cacos withdrew, promising to return soon. But the inhabitants of the city called from Cap-Haïtien the Americans who came to seize the city to protect it from the cacos.

• In 1925, under President Borno, the l'Ecole des Soeurs and the Hospital were built. Work on the Gros Morne Port-de-Paix road was completed.

This commune has seven communal sections. The inhabitants of the commune are called Port-de-Paisien. The relief of the commune of Port-de-Paix is dominated by hills, plateaus and plains. Its climate varies from normal to cool according to its geographical position which is both coastal and inland.

The air of Port de Paix is ​​at times unhealthy, because of the swamps that surround the city. The mountains of this commune contain iron; they are productive trees in coffee, commodities and food supplies; the most beautiful artichokes of the country grow there. The climate in the mountains is very favorable to health. 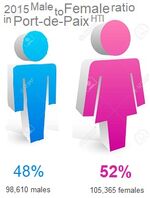 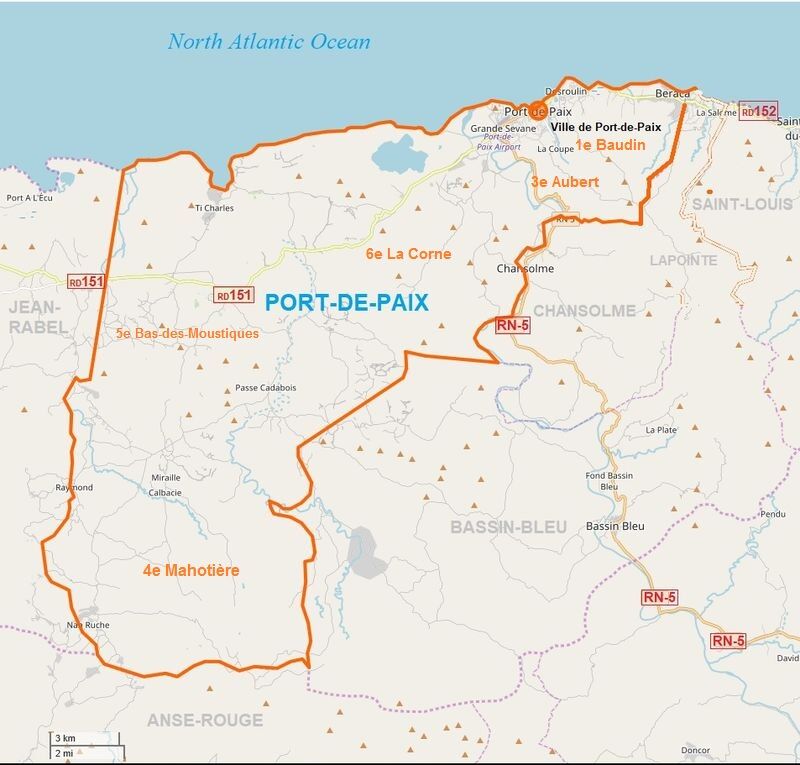 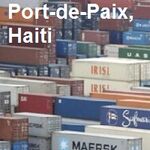 With regard to economic and financial establishments, the commune of Port-de-Paix is better equipped than the others. It has three banks, however, it does not have a Caisse populaire. There are also hotels, a pension, about a dozen restaurants, two home centers and a marketing cooperative.

A rich agricultural area, it grows coffee, bananas, tobacco, rice, and cacao. Because the city is so accessible to the U.S. via the Atlantic, a flourishing smuggling trade has developed in Port-de-Paix since the 1990s.

The coasts are very full of fish. The Trois Rivières River, after crossing Plaisance and Gros-Morne, flows into the bay of Port de Paix after a journey of 35 leagues.

The Ministry of the National Education of Youth and Sport is represented in the municipality by a departmental direction. The person in charge is a departmental director responsible for supervising his activities. Assisted by its staff, it coordinates certain activities and establishes a plan of operation concerning the different schools within this municipality. The distribution of schools is as follows Five private school at the kindergarten level and at the primary level 11 public schools, numerous private, and 6 congregational. For the secondary level there are two Public Schools numerous private schools and one Congregational School.

The Ministry of Public Health and Population is represented in the commune of Port-de-Paix by a departmental directorate. For health care facilities there are two non-bed health centers, two hospitals, 13 clinics and three medical laboratories. In addition, a team consisting of doctors and dentists, nurses and auxiliaries, many certified matrons and a dozen laboratory technicians, provide the health service at the various health centers of the municipality.

As for water availability, five rivers, two dozen Springs and a pond were inventoried in the municipality. For the other water points, eight artesian wells, public fountains with at least 25 taps and also three pumps were recorded. The water coming from the public fountains is the most used. It is used for domestic use and especially for drinking. About Electricity, a large part of the commune of Port-de-Paix is electrified. The HRE is the institution responsible for electricity in this commune. It provided an average of 56 hours/week.

With regard to administrative and judicial infrastructures, the commune of Port-de-Paix has a peace court, in the city at Rue Dumarsis-Estime. There is also a prison.

With respect to Religion, more than 100 temples of all faiths were counted in the commune of Port-de-Paix. These confessions are: Catholics, Adventist, Baptists, Pentecostal and Jehovah's Witnesses. The number of Pentecostal temples and churches of God is better represented are 44% of the total.

In terms of Communication, the municipality of Port-de-Paix has no "newspapers/journals" but has seven radio stations and a television station.

In Port-de-Paix, radio stations abound, many of them FM, and a few broadcast over the Internet. Fans of Compás in Port-de-Paix favor such music artists as Shoubou de Tabou Combo, Cubano de Skah Shah, and Drumcp.

As for leisure, the gaguères, numbering six, constitute the main places of distraction for the inhabitants of the commune. For other types of entertainment, four football (soccer) fields, two basketball courts that are in deflated condition, a theatre room and six night clubs have been inventoried at the level of this municipality.

Port-de-Paix is a twin city of Oakland, California, USA, as recognized by Sister Cities International.

Port-de-Paix Airport from above 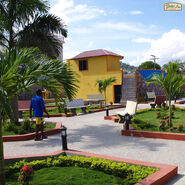 All smiles in Port-de-Paix 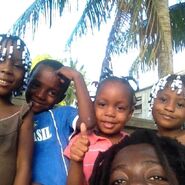 All smiles; Children in Port-de-Paix

Community content is available under CC-BY-SA unless otherwise noted.