Petit-Goâve (Kreyol: Piti gwav), one of the first cities to be established in Haiti, is a commune in its Western Department. Petit-Goave is the second most populous city in the Léogâne Arrondissement and the 13th most populous city in Haiti. It was inhabited by the Amerindians, who named it Goâve. It became Aguava when the Spanish colonists settled it. Eventually the French acquired and divided it, re-naming it Grand-Goâve and Petit-Goâve. Petit-Goâve served as the temporary capital of the prosperous colony of Saint-Domingue. The city is situated at the mouth of the Rivière de la Digue at the head of the Petit-Goâve Bay.

Petit-Goave was one of the wealthiest cities in the country, thanks to its position on the Windward Passage and the importation of slaves. Today, the city of Petit-Goâve is home to a hospital, three high schools, 5 volleyball, and 3 football (soccer) clubs (2008) which have shifted the city's economy into service industries, though it still retains some agricultural activity. The commune of Petit Goâve has already produced a president who would later be named King Faustin Soulouque, using the title Faustin the 1st. The city was once nicknamed the "Ti Goâve"; it began rebranding itself as a "Creative Capital" to emphasize its educational resources and arts community.

"Never doubt that a small group of thoughtful, committed citizens can change the world; indeed, it's the only thing that ever has."

The city of Petit-Goâve was founded in 1625 and raised to the rank of commune in 1663. The city celebrated its 350 year landmark anniversary with a three day celebration, beginning on a Friday, throughout which many events showcasing history, Haitian society and culture were put on. A guest of honor to the ceremonies was Haitian-Canadian author, Dany Laferrière, whose honor in the French language, with his election into the French Academy, makes him one of the world's 40 authorities on the language. Since Petit-Goâve is his hometown, Laferrière felt it best to celebrate both events as one with a visit.

Eglise de Petit-Goave, Dec 1904
Add a photo to this gallery

Petit-Goâve had its configuration re-aligned in the aftermath of the 2010 earthquake when a strong 5.9 aftershock struck at the epicenter of which Petit-Goâve lay close to. A week later the U.S. Marines arrived in Petit- and Grand-Goâve to bring aid supplies.

Petit-Goave is located at 18.4311° N, 72.8545° W. According to the IHSI, this commune has a total land area of 387.88 square kilometers (149.76 square miles), of which 274.67 km² (71%) is rural, 106.52 km² (27%) is suburban, and 6.69 km² (2%) is urban. Seated in the passage of Route Nationale 2, the municipality of Petit-Goâve has twelve communal sections. It is bordered by the commune of Grand-Goâve on the east, by the Southeast Department communes of Bainet and Côtes-de-Fer on the south, and by the Nippes Department city of Miragoâne on the west. Petit-Goâve is a coastal town consisting mostly of hills and a climate that varies from hot to cool. Its inhabitants bear the name Petit-Goâvien.

At the level of Economic and Financial Infrastructures, the municipality is thinly equipped. There are two hotels, three restaurants and a bank.

The new port has been renovated with new customs offices and bonded warehouses built in accordance with the ISPS Code (International Code Ship and Port Security). It has the capacity to receive 2,000-ton boats along a long coastline of 1,500 meters. The construction work was a part of the area development work for enhancing competitiveness and overall development of Haiti.

The Ministry of National Education of Youth and Sports is represented in the Municipality of Petit-Goâve by a school inspection office. Six kindergarten, some mostly private primary schools and twelve secondary schools have been inventoried in the commune.

The Ministry of Public Health and Population is represented in the Municipality of Petit-Goâve by a Communal Office. One hospital, six dispensaries, a health center with bed, and seven clinics were registered in the commune with a team of doctors (graduates and trainees), dentists , nurses, auxiliaries, certified matrons and technicians.

The community has six rivers, five springs, two ponds and a lagoon. Five traditional wells and public fountains with nine faucets were also listed. Electricity of Haiti is the institution that ensures the distribution of the current in the city of Petit-Goâve which is the only electrified zone. Thanks to an electric motor, this current is provided for 84 hours a week.

For Administrative and Judicial Infrastructures, the municipality has a Commissariat, two Courts of Peace, a Civil Court and a Public Prosecutor's Office. There is also a prison.

On the side of Religion, nearly 150 temples of all beliefs have been enumerated in the commune. The number of Pentecostal churches is the most numerous, thirty-six in total.

In terms of communication, the municipality has a telephone office, four radio stations, a newspaper / magazine and a television station.

As for Leisure, the commune of Petit-Goâve has a public library and a cinema room. There is no museum, nor theater. Football (soccer), volleyball, basketball and cycling are the sports practiced in the municipality. In addition, there are four nightclubs, and four public places. In terms of Cultural Heritage, the town has two forts and three beaches. Every August 15, the town of Petit-Goâve celebrates its patron saint by receiving a large number of visitors.

Recently Minister of Tourism, Stephanie Balmir Villedrouin, has uncovered natural features of Petit-Goâve that make it a potential tourist destination. She, together with a Ministry of Tourism delegation and Petit-Goâve Mayor, Sandra Jules, went on an exploratory mission. They visited underdeveloped tourist attractions with a view to develop them, to increase tourist spending there.

The government of Haiti has approved funding for three projects in Petit-Goâve along the shoreline, to make the area more desirable to tourists. The projects include renovations of public beaches Mon Repos, Cocoyer, and Banana Cocoyer. 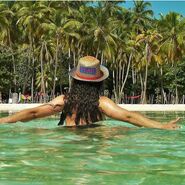 The newly laid out Petit Goâve landing stage, with bar and integrated toilets 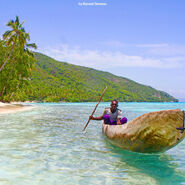 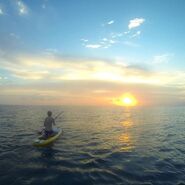 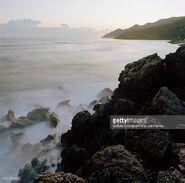 Rocks on the coastline of Petit-Goave, Haiti

Retrieved from "https://haiti.fandom.com/wiki/Petit-Go%C3%A2ve?oldid=29146"
Community content is available under CC-BY-SA unless otherwise noted.