Mirebalais (Kreyol: Mibalè) is a city in the Centre Department of Haiti and the seat of government of the Mirebalais Arrondissement. As of the 2015 census, the population was 97,755, making it the second-largest city in the department by population, and one of the Central Plateau's population centers. The city's easily accessible location is the midpoint between Port-au-Prince and Hinche, both which lie 56 kilometers (40 miles) away, on a newly-renovated Route Nationale 3.

The municipality of Mirebalais received this name from the immense quantity of wild animals that the first French found there, which reminded them of the little country called Mirebalais in Poitou, where some of them had probably been born.

General Montmorency Benjamin and Benjamin Noél his father, were born in Mirebalais. The first was Seeretary of State of War, Commander of the Arrondissement of Gonaïves, and Senator of the Republic.

Mirabalais was once renowned for the tomtom, a kind of mastic made of pounded bananas. All the world knows the Tomtom Mibalé if not for having eaten it, at least for having heard of it.

Mirebalais has always been considered a very place important in terms of military defense in the event of a foreign invasion, it had fixed the attention of the colonial government. The government of the Republic had made a deposit of war material and other precious objects there: Moreau de Saint-Méry says that "enveloped in mountains and surrounded by parades, the Mirebalais can serve as a last resource, and the man of genius in would make a field of glory. "President Pétion had drawn a line of defense against Christophe Trianon, a position fortified by nature.

The first citizen to represent this commune in the first House of Commons in 1817 was Louis Vérac.

• In 1791, in the voice of Pinchinat, the freedmen of the West openly settled in Mirebalais and vainly demanded the execution of May 15 National Assembly decree to Governor Blanchelande, who dealt with the absurd and criminal petition. Then they met in the village church, and appointed forty delegates charged with using the most energetic means to assert their rights. They had chosen Nirebalais for the base of their operations because the area, surrounded by high mountains, is easy to defend.

• On September 7, 1791, after the battle of Pernier, the royalist whites of Mirebalais met at Croix-des-Bouquets, with the freedmen, where they signed a concordat for the faithful execution of the national decrees in favor of the freedmen.

• On December 11, 1822, the administrative officer was abolished along with all those from municipalities located inland such as Mirebalais.

• In 1882 Mr. Edmond Roumain, a certified chemist, analyzed a rich sample of cinnabar coming from around Mirebalais. General Salomon, then President of Haiti, had a sample of this precious mineral. The area became known for its mill quarries.

According to the IHSI, this commune has a total land area of 330.87 square kilometers (127.74 square miles), of which 247.47 km² (74%) is rural, 81.30 km² (25%) is suburban, and 2.10 km² (1%) is urban. Mirebalais has four communal sections. It is bordered on the north by the town of Boucan-Carré, on the east by the city of Las Cahobas, on the south by the Western Department town of Thomazeau, and on the west by the town of Saut-d'Eau. The city developed on the right bank of the Artibonite River, about 15 km (10 miles) downstream of the hydroelectric dam of Péligre, at its confluence with the La Tombe River. The City of Mirebalais is one of six municipalities in the southern part of the Central Department, better known as the Lower Central Plateau. It is an interior commune, whose dominant relief is the plateau with a normal climate. Its inhabitants are called Mirebalaisien(ne).

The climate is very healthy and the temperature is generally dry.

There are springs of thermal water at the border of Mirebalais and Petite Rivière de l'Artibonite, on the right bank of this river, near a cave whose entrance is very wide (100 feet wide); and then the Hot Ravine, so called because of the heat of its waters. They are very appreciated by the neighboring inhabitants who come often to draw health there, in spite of the lack of suitable establishment.

The very fertile Mirebalais plain is suitable for breeding the cattle that come in abundance. Rivers like the Artibonite, the Fer-å-Cheval, Gascogne, Tumbe, the Bourg, etc. put down a favorable silt on agriculture. Coal mines of the district were conceded by R. Gardére in 1906. The ground of the mountains produces beautiful coffees and a lot of foodstuffs. Cotton and mahogany wood are grown there.

Mirebalais, one of Haiti’s oldest towns, has been a nodal point for commerce and agriculture for almost 300 years. Now, it accommodates a modern teaching hospital, Hôpital Universitaire de Mirebalais while sustaining a large hinterland of farmers through a densely packed and active market. Visiting its stalls to get a sense of market values for coffee and other cash crops and produce – many of the Zanmi Kafe families in Bois Jolie and Blanchard may ultimately bring their products here.

Despite the heat and hustle, it is lovely to see how vendors lay out their stock. A particular stall was selling rapadou, a traditionally made raw sugar that is highly nutritious and has a distinct, toffee-like flavor. Each of these ‘logs’ is about three feet long and must have weighed at least 10lb. It leaves one eager to try this with some Haitian sock-brewed coffee.

At the level of Economic and Financial Infrastructures, the town has a hotel, a some restaurants and a marketing cooperative. In terms of economic activities, trade and agriculture come first. The local economy is based on growing coffee, lime, sugar cane, sisal, cotton, pigeon peas and rice. The town does commerce through a super market, a large shop, a few building materials shops, several food supply centers and twenty depots. The town also a gas station, two private morgues, four pharmarcies, two photocopying services, and a dry cleaning.

Mirebalais has developed into a significant municipality in the Mirebalais Arrondissement. The town is currently seeing various developmental projects that are surely improving the lives of the 165,000 people living there. The Arrondisement capital, which is only 30 miles and a 45-minute drive from Port-au-Prince, has become a place for people seeking a less populated town with many employment opportunities. With the developmental projects launched in the town, people are able to get jobs.

Another project, a luxury-housing development built by Oasis Global Enterprises, will erect lavish homes and condominiums with amenities such as public spaces, nightclubs, retail stores, a business district, and hospitality venues.

Meanwhile, Oasis Global Enterprises is about to start a housing development project in the town. Under the project, residential homes and bedroom apartments will be built in an outskirts area of 32 acres. Not only that, the project also involves the construction of a business center, entertainment venues, public parks, and restaurants, among others.

Compared to some communes of the Central department, the municipality of Mirebalais is better equipped.

The Ministry National Education of Youth and Sports has been represented in the municipality for over 27 years by a school inspection office. Two kindergartens, dozens of (pre-school included) mostly private primary schools, eleven secondary schools and two technical and vocational schools were inventoried in Mirebalais. The central office for low-level literacy is in Mirebalais. It contains dozens of centers of which nearly half are at the service of Mirebalaisiens.

Mirebalais is proud of is the establishment of a modern place of healing. In a first for Haiti, Mirebalais has erected a thoroughly-modern teaching hospital. Mirebalais Teaching Hospital (MTH) is a 320-bed, six-operating room, one-intensive care unit full-service medical facility. Standing seven stories high on a large tract of land, it contains nursing and medical schools with internship and residency training as well. The employment potential for Mirebalais citizens is enormous. Two global NGOs, Partners in Health and Zanmi Lasante, have partnered with the Ministry of Public Health to fund the project.

The Ministry of Public Health has been represented in the commune for over five years. There are nine establishments providing health services in the area with dozens of technicians and health workers.

In terms of water availability, the municipality has five rivers (one river captured), five springs (two springs captured), and a few artesian wells, public fountains and pumps. Regarding Electricity, the city and some localities are electrified.

Several faiths were counted in the commune. The number of churches (chapels and temples) is greater for the "Baptists" (20) and the churches of God (15).

The Orient Lodge of Mirebalais, installed in April 1888 is entitled La Charité No 53.

The name of Mirebalais was given to this canton by settlers who found some similarity with a canton of Poitou in France.

After the municipality of Hinche, Mirebalais is the only municipality to have a telephone service with a large number of lines and which are functional (over 600 lines in total).

The post office arrives from Port-au-Prince via Grands-Bois and Trianon on Sunday, continuing for Las Cahobas and Hinche and returns to Mirebalais on Wednesday. Port-au-Prince is the natural outlet for food and Mirebalais products.

In addition, the municipality has two radio stations, but it has no newspaper / magazine or television station.

As for Leisure, the town has two libraries (one public, the other private). It does not have a museum, theater nor cinema. Residents practice FootBall (soccer) and volleyball in the town. Two night clubs / dancing restaurants and ten gaguères complete the leisure areas. Note that the town has a public place that is well maintained. As for Cultural Heritage, the town has a fort (le Fort Anglais).

The City of Mirebalais receives more than 1300 mm (four feet and some change) of rain per year on average. The distribution of precipitation is done on two major periods. The first runs from April to October, it is the rainy season and the other is from November to March, and represents the dry season. The rainy season is the period of the major agricultural activities in the communal sections.

The town enjoys rather mild temperatures with an annual average of 26.2 ° C (80F). The period of the freshest rain coincides with that of the lowest rainfall especially from December to March.

Some forage species used in livestock feed are also listed. This is the case of the herbs of varieties known under the designations of Guinea and rope to seed

Canoe on the river 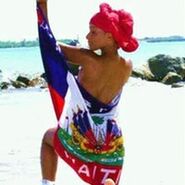 Women with triplets at Mirebalais 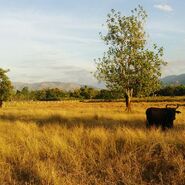 Downtown Mirebalais
Add a photo to this gallery

Retrieved from "https://haiti.fandom.com/wiki/Mirebalais?oldid=29593"
Community content is available under CC-BY-SA unless otherwise noted.