Marbial is a district of Jacmel, Haiti. The district has a single communal section, of the same name, which is coexistent with Jacmel's third communal section. In the past, Marbial was one of the main coffee producers in the Caribbean.

Marbial is described as a poor and crowded agricultural region in the Jacmel hinterland. Despite its great agricultural potential, Marbial faces serious problems that prevent it from developing due to the degradation of the environment, according to several notables.

The inhabitants of Marbial live mainly from agriculture. Beans, peas, corn, yams, cabbages, bananas and coffee are, among other things, the main productions.

With respect to the vulnerability of this area, people wonder if Marbial is not going to disappear. In Marbial, about 800 hectares of productive land are lost each year by erosion. In rainy periods, the torrential rains that fall on the communal sections cause considerable damage not only in the hills but also in the city of Jacmel.

The state in which school is evolving has been criticized by a parish leader. A lot of efforts have been made at the school centers, particularly by the Catholic Church and the Protestant sector. Marbial has 46 schools, mostly private institutions and very few poorly equipped national schools. But it lacks professional centers that would be absolutely necessary to convince young people who complete the primary or basic cycle not to emigrate to Jacmel (city) or Port-au-Prince.

Marbial is facing a major health problem. There is only one health center operated by the Little Sisters ofSainte-Thérèse congregation. Due to the impassability of the road that should connect Marbial to Jacmel and Port-au-Prince, where the nearest hospitals are located, many patients die on makeshift stretchers, including pregnant women, mentions one CASEC coordinator.

In Marbial, there is no electricity. To quench thirst with drinking water is a headache for the population; yet water does not fail. There are indeed many sources that feed the rivers of Gosselin, Fond Melon, Cochon-Gras. But these waters, where humans and animals drink, are unhealthy and constitute threats to the health of the population,

For all five communal sections, there is only one police sub-station with fewer than 10 police officers. In 2009, a local completed the building housing the court of peace and the registry office, which is very little operational so far. The State did not provide this premises with basic equipment and materials to operate public offices. The members of this association have said they are determined to go all the way, in order to save the next generation against the threats of disappearance of the Marbial district. 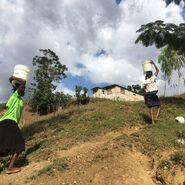 Marbial Road
Add a photo to this gallery

Retrieved from "https://haiti.fandom.com/wiki/Marbial?oldid=22073"
Community content is available under CC-BY-SA unless otherwise noted.