Limbé (Kreyol: Lenbe) is a commune in Haiti's Northern Department and the seat of Limbé Arrondissement It had a population of 85,302 inhabitants as of the 2015 census, making it the second most most populous city in the Northern Department. Bas-Limbé and Limbé are the two communes of its borough, which includes seven other rural sections. It is located 220km (137 miles) north of Haiti's capital Port-au-Prince. 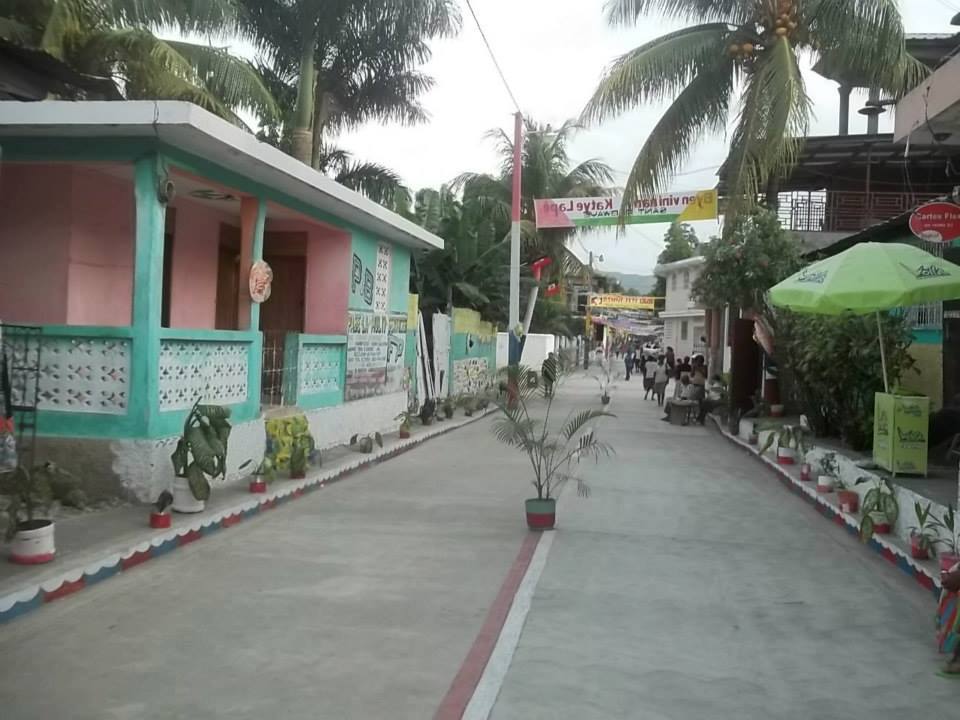 The military post of Camp-le-Coq was in the rural section of the same name. There was also the district of Lower Limbé located in the first rural section (law of August 29, 1908).

The village was settled in 1715 by the establishment of a chapel, of which the patronal feast is June 29, at Saint-Pierre. In 1789 the town was of little importance; but 22 sugar plantations placed in this little plain gave it vitality.

• At the time of the general slave insurrection in 1791, Governor Blanchelande sent a regiment from Cap-Haïtien to secure Limbé, headed by Colonel Thouzard. Thouzard, hearing the noise of the cannon from the direction of the cape, retrograded, and compelled Jeannot, who surrounded this city, to abandon his prey. The insurrection had begun with the burning of the Chabaud habitation, which took place on August 11th. Limbé before that time was the scene of the events of the African Mackandal, whose name had become a term used to describe any individual who deals with fooling the masses using tactics. Mackandal used poison to kill. He was a long time in the woods. Finally he was arrested, convicted and burned alive in 1758.

• In January 1793, Sonthonax ordered Laveaux to march against Jean François and Biassou who occupied the mountains of Limbé,Soufrière and le Tannerie. Three army corps left Cap-Haïtien to counter them.

The insurgents occupied the chain of mountains stretching from Marmalade to Limbé. A great intelligence existed between Jean Francois and Biassou. Lieutenant Colonel Nully attacked and took out eight positions.

• In October 1801, Limbé responded to the insurrection of Moïse. When Christophe arrived there, he found the whole township in insurrection. Joseph Flaville, who commanded it, had secretly instigated the movement. Christophe left for Port-Margot. He returned soon to Limbé, where he had Joseph Flaville arrested, whom Toussaint had shot in Au Cap in November. Dessalines soon left the Cape to definitively restore tranquility. When he arrived at Limbé, a colored man was brought before him. At the sight of the mulatto, he exclaimed: "I do not want to kill those of that color any more, I have taken the oath; that is enough. For too long, we have been lost. Give freedom to this brother." He shot every farmer he met on their respective habitations.

• At the arrival of the French, in 1802, Romain fought in the hills of Limbé for Toussaint with a rare intrepidity. On August 2, the heights of Limbé and Borgne were in full insurrection with Pilate, L'escalier, Labranle, and Mapou against the French. In September the leader of the Vamalheureux gangs, in revolt against Leclerc, was established between the Borgne and Limbé.

• Limbé was once home the colonel Belin de Villeneuve , industrious genius of which one has much improvement in the manufacture of the sugar and the other machines which serve for the production of this commodity. George of Petit Houars who was sent by the French cabinet to treat in Haiti in 1833 was also a settler from the Lower Limbé.

• Under King Christophe, General Paul Romain was Prince of Limbé, and Monsignor Jean Baptiste Francisque was Duke of Limbé under the Empire in 1849.

• On August 26, 1902, there was a terrible battle between the troops of insurrectionists Jean Jumeau, Firmin, and those of the Provisional Government. On the 30th they succeeded in driving the enemy away and finally taking possession of Limbé.

• In 1925, construction of the concrete Limbé Bridge was completed under President Borno. The town is so close to Cap-Haïtien and supplies a great deal of coffee, and never has it been thought to connect them by a good road, to bridge the river. Formerly, the path was impracticable, took 4 hours of horse in good weather, and when it rained, floods would enter the city and take everything.

Limbé, Haiti is located at 19.7026° N, 72.4051° W. According to the IHSI, the commune has a land area 125.80 square kilometers (48.57 square miles), of which 75.29 km² (57%) is rural, 50.51 km² (40%) is suburban and 3.64 km² (3%) is urban. One of the eighteen communes of the Northern Department, Limbé is an inland municipality consisting primarily of plains and its climate varies from the normal to the extremes. It is bordered on the north by the town of Bas-Limbé, on the east by the city of Acul-du-Nord, on the southeast by the city of Marmelade, on the west by the city of Plaisance, and on the northwest by the town of Port-Margot.

The law of November 20, 1821 fixed the precise distance from this town to the capital has 54 leagues.

The Limbé River is 45 kilometers long, rarely also called Red River, passes near the Limbé center; it is very still in the rainy season; it drains at the port of Margot, near the point of Limbé. Many times the Chambers, at the request of the Government, voted for values ​​for its containment, especially in the budget of 1884-85. This work has yet to be done.

The Trois Rivieres River also sprinkles the town above the habitations at Mount Calumet, which stands picturesque.

Its inhabitants bear the name of Limbéan.

Limbé derives its strength and a base of diverse agriculture from the Limbé River. Near the sea in Bas-Limbé, rice is produced and in the city's surrounding areas, mango, coffee, banana and fruits of other kinds are produced. The town exports from Cap-Haïtien.

Regarding the Economic and Financial Establishments, a dozen restaurants, varying according to their size, a bank, a credit union and a marketing cooperative provide services to the municipality of Limbé.

The air is cold and wet. There falls 5934 millimeters (234 in.) of rain per year. In this commune, is also found a mine of lapis lazuli, which is used to make blue paint. There contains deposits of ocher, sandstone ophite, and marble. This is a fertile district, suitable for coffee growing. Timber and honey is also a substantial production source.

The city of Limbé was built at the edge of the Limbé River. Its uniqueness is matched by the valley of the river Limbe, which is still green and lush, in contrast to a region dealing with deforestation issues.

General and advanced deforestation is carried out in large scale at Limbé which has diminished the river's flow, presently. However as compared to the rest of Haiti, Limbé still continues to have trees in large numbers.

The Ministry of National Education of Youth and Sports is represented in the commune by a school inspection office. The school district has several primary schools and secondary schools, along with two vocational schools, eleven literacy centers and a university.

In terms of health, the municipality has no representation from the Ministry of Public Health and Population. However, five clinics and a hospital were inventoried. The medical staff is composed of doctors, dentists, nurses, auxiliaries, a certified matron and laboratory technician for more than 45,000 inhabitants.

The town has a hospital called "Good Samaritan" that works and research to fight against malaria. "Hôpital Bon-Samaritain" and Dispensaire St-Jean are the two well-functioning facilities in Limbé. A lot of people flock to the hospitals due to easy accessibility of services in health care.

The commune of Limbe is well supplied with water, it has 13 rivers, 17 sources, a pond, three lagoons, single boreholes, artesian wells and public fountains.

To power the city an electrical dam was built by Dr.Hodges around 1973. In 1976, people got running water at their homes and public fountains. However, the dam is not active any longer. Only the city of Limbe is electrified by means of an electric motor. The power frequency is 27 hours / week.

Limbé is flood prone. The major flash flood on November 18, 1963, caused the hurricane Flora. Estimates state that around 100 to 500 people lost their lives. The raging water washed away and damaged a large number of houses.

More than 75 churches (Chapels and temples included) have been inventoried in the municipality of Limbe. Adventist churches (28) are predominant, followed by Baptist churches (23 in total).

The lodge of the Orient of Limbé, under the Grand Orient of Haiti, is titled; les Mages de l'Orient No. 41.

The municipality has functional telephone lines. The postal office does not exist in the Commune of Limbe. The Limbeans are obliged to go to Cap-Haitien to send their mail to the outside or they use the 4VEH radio especially for sending messages to relatives and friends in the various communes of the country. There is no TV station, however, the municipality has a radio station Jupiter located at Haut Levé (National Road) and a newspaper, "la Compass".

The post leaves Limbé on Monday morning for the north and returns on Wednesday. The departure of the North links with Gonaïves by the postal route which passes through the gorges of Limbé and Plaisance. Another courier departs on Monday morning for Port-Margot, Borgne, Port-de-Paix, Jean-Rabel, and Môle Saint-Nicolas, and also returns on Wednesday.

As for Culture and Leisure, the town of Limbe does not have a library, but it has a museum. The parish hall serves as a theater room. Football (soccer), volleyball and basketball are the sports practiced in the municipality. There are grounds, certainly, for different sports, but they are not in good condition. In addition, there are eight gagueres and a public square.

Le Musée de Guahaba An archeologist founded the Museum of Guahaba, dedicated to the native artifacts of the Ameridian from the Taino and Arawak tribes. The Amerindians called this place Guahaba before it took the name of Limbé.

Fort Dahomey (or Fort Romain, or Fort Crête-Rouge) is one of about twenty military structures built on the territory of Haiti after independence in 1804: this defensive system was directed against a possible return of the French, former masters of the colony of Santo Domingo. The ruins of the fort are located in the communal section of Camp-Coq.

Place Saint-Pierre - Limbé
Add a photo to this gallery

Retrieved from "https://haiti.fandom.com/wiki/Limb%C3%A9?oldid=29986"
Community content is available under CC-BY-SA unless otherwise noted.