"Tout moun se moun."
Everybody is somebody.
-Jean Bertrand Aristide

Les Cayes (Kreyol: Okay) is a port city and chief commune of Les Cayes Arrondissement in the Southern department on the Carribean Shore of Haiti. In 1815 the South American liberator Simón Bolívar visited the port to accept Haitian arms and a contingent of troops to aid him in his fight against Spain.

At the time of the Spaniards, the town of Les Cayes was called Salvatierra de la Sabana, (English: "the land saved from the waters"). The current plan of this city is no different from that established in 1786 by the engineer Philipeau. The municipality has eight communal sections. The city is coastal and the communal sections are inland. The dominant terrain of the commune is the plain and its climate is warm. Its inhabitants call themselves Cayen. In 2013, the city was ranked number nine by MondoBlog magazine on its annual top-ten list of the "most beautiful communes" in Haiti.

Founded in 1786, Les Cayes was plagued by disease and pirates during colonial times. Although major events have occurred in Les Cayes during the wars of independence, this city had never experienced such great disasters to which Cap-Haïtien and Port-au-Prince were subjected. However, more or less violent hurricanes, and the flood lions of the Islet and South Ravine rivers have given birth to serious fears. But the most terrible scourge that the city has yet tested, is the hurricane that occurred on the night of August 12 to 13, 1831: the violent efforts of the wind that shattered and overturned public buildings and particular, joined a flood of the whole city by the watersde from the sea, reaching more than 5 feet in some places: several people were victims are spread out in the plain: the ships that could not be found anchored in the port of Les Cayes, and that go during the winter. Public buildings had all been restored, and new fortifications built to defend the port: various bridges were raised on the South Ravine to facilitate connections with the Raynaud suburb. Outside the market fountain, other small formerly water in the hospital, arsenal and ships of the harbor: they no longer exist. All these improvements were due to the care of the General Marion, buried in the church on November 20, 1831. The plain of a valley appears to be the place where the Spanish city of Salva Tierra de la Zaban existed, founded in 1503 by Ovando, and abandoned in 1606. In 1815 the South American liberator Simón Bolívar visited the port to accept Haitian arms and a contingent of troops to aid him in his fight against Spain. In 1824, President Boyer had welcomed a large number of black American immigrants. Les Cayes was the scene of a massacre in December 1929 when U.S. marines killed a dozen peasants protesting poor economic conditions under U.S. occupation. The town was badly damaged by fire in 1908 and by a hurricane in 1954. Potteries were established there, as at Anse-à-Veau, which provided vases made of cooked glass where fresh water is kept. Also produced were sugar, syrup, lots of rum and tafia. Les Cayes is Haiti’s leading southern port, exporting sugar, coffee, bananas, cotton, timber, dyewood, and hides. Historic landmarks include an arsenal and several forts dating from buccaneer times. Poor roads led to the town’s isolation for much of the 20th (1900s) century, but a paved highway now links it to the national capital, Port-au-Prince.

The inhabitants of Les Cayes are renowned for their urbanity. In 1816, they gave generous hospitality to Colombians fleeing their homeland, among which was the famous Simón Bolívar who, under the protection of President Pétion, prepared for Les Cayes the expedition whose success led to the ruin of Spanish power in Western America.

The earth breeze comes from the northwest and turns as you go towards the northeast until noon; then begins the sea breeze coming from the southeast. Towards evening it turns to the south. Rainy weather arrives in June and July; the drought in August and September. Île-à-Vache is located 3 leagues southwest of the city.

The bay of Les Cayes is 3 leagues wid

The Grand river of Cayes or Islet has its source in the Hood Mountain Range, and waters the plain of Les Cayes, and flows into the South Ravine and the river Raynaud, in the bay of Les Cayes.

Morne Laporte serves as a limit to the municipalities of Les Cayes and Cavaillon.

At the level of the economic and financial infrastructure, the municipality has ten hotels, four pensions, 11 restaurants, two banks, a Caisse populaire and twelve marketing cooperatives.

Trade, crafts and industry are the predominant activities of the commune. The commune of Les Cayes is better equipped with economic establishments than the other communes of the department. There are five gas stations, two private morgues, 12 pharmacies, 6 Photocopy services, ten Beauty Studios, and three dry cleaning, amongst others.

The Ministry of the National Education for Youth and Sports is represented in the commune of Les Cayes by a departmental office. Twenty six kindergarten, several primary schools and several secondary schools were inventoried in the municipality. In addition, there are four technical and vocational schools, seven Literacy centers, universities and higher accounting, secretarial and informatics schools.

The Ministry of Public Health and Population has been represented in the commune by a departmental office for twenty-seven years. The municipality of Les Cayes is well equipped with sanitary facilities, there are three hospitals, a health center without a bed, a sanatorium and five clinics with a very varied staff.

With regard to water resources, the municipality has four rivers, 60 springs and a lake. From the capture of some sources, the CARE and the Evangelical Baptist Mission of South Haiti has endowed the commune with artesian wells and public fountains (equipped with taps or pumps). The city and most of its communal sections are electrified.

With regard to administrative and judicial infrastructures, the commune of Les Cayes has a court of appeals, a peace court, a public prosecutor's office and a civil court. There is a National Police office d' Haiti (PNH), two civil status offices and one prison.

More than 100 churches (temples and chapels included) were counted in the Commune of Les Cayes. The prevalent faiths are Catholic, Bishops, Baptist, Adventist, Pentecostal, Church of God, Jehovah's Witness, and the Church of Jesus Christ of Latter-day Saints.

The city is equipped with telephone service. There are ten radio stations and three television stations in Les Cayes, there is no newspaper/magazine.

The municipality has three libraries, three theatres, three movie theatres, and no museum. Sports practiced are football (soccer), basketball, athletics, volleyball, cycling and tennis. Three night clubs and Seven Gaguères have been inventoried in the municipality. There are also five public place and one historic place.

The monuments and sites of the commune are of colonial, historical and natural types. The City of Les Cayes remains important in the history of the Republic of Haiti. It should be noted that Les Cayes is also the homeland of many Chiefs of State: Charles Hérard Ainé (Haque River), Lysius Félicité, Salomon Jeune, Michel Domingue, Boisrond Canal and Antoine Simon and, the composer of the song Haiti, darling, Othello Bayard. 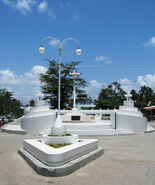 Pupils in their class at the École Nationale Charles Lassègue in Les Cayes, Haiti.

Les Cayes – equipped with a Brigade.[1] 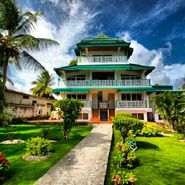 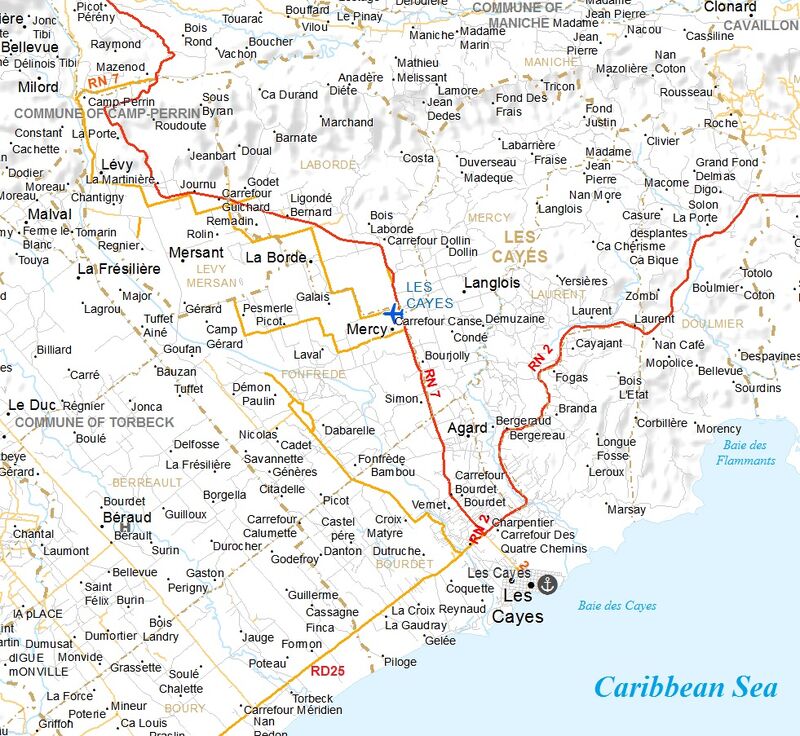 Retrieved from "https://haiti.fandom.com/wiki/Les_Cayes?oldid=30415"
Community content is available under CC-BY-SA unless otherwise noted.