Les Anglais (Kreyol: Zanglè, French: "The English"), is a commune in the Chardonnières Arrondissement, in the Sud department of Haiti. As of the 2015 census, it had 27,182 inhabitants.

The commune of Les Anglais, one of the eighteen communes of the Southern Department, includes three communal sections. The 2nd section of Edelin is inland and the city and the two other communal sections are coastal. The dominant relief of the town is the plain or the hill depending on whether one is in town or in communal sections.

Inhabitants of the town of Les Anglais are called Anglaisien.

The village is built on the edge of the sea in the plain of Les Anglais, so named because of the frequent descents that made the war buildings of this nation during the French occupation. The port, not open to foreign trade, offers good anchorage. The sea is always rough. The area knows a pleasant temperature. It is located on the site of the former sugar plantation of Gravier, between Cayes and Tiburon near Petite Rivière des Anglais which is full of fish and which provides excellent carps. This river has its source on the Morne Cahouane.

Les Anglais was settled by the British in 1774. The town became quickly allied with British troops, because the French wanted to re-institute slavery in the region, even though it had been previously outlawed.

It was successively erected as a military post, and finally as a commune in 1881.

In 1869, Les Anglais was overrun by the Cacos and Piquets. The population had suffered considerably from these disorders.

Les Anglais is the birthplace of Colonel Nicolas Regnier, who was famous in the wars of Independence.

Agriculture is the main economic force in town, and farmlands produce fruits, coffee, and tobacco. Non-government agencies have seen the capacity for growth in the area of exportation of foodstuffs. But in order for Les Anglais to be an exporter, a gathering of commerce and education forces, and knowledge of economic realities must coalesce for the vision to manifest. For instance, farmers must learn quality assurance control to make their products more marketable.

Trade and livestock also dominate the economic activities of the municipality. Port-au-Prince, Chardonnières, Tiburon, Les Cayes, and Miragoâne are the main communes with which Les Anglais trade.

Numerous springs water the habitations of the interior and the hills that produce coffee, campeches, food, fruits, syrup, timber and dry fish.

Market day is on Saturdays.

Les Anglais endures heavy rains like the rest of Haiti, and is ever vulnerable to hurricanes sweeping the coastlines of Haiti, all too frequently. The year 2008 was especially bad, when several hurricanes buried the town in roiling flood waters. The destruction of homes, farmlands, and livestock was devastating.

The Ministry of National Education of Youth and Sports is not represented in the commune of Les Anglais. Twenty-two primary schools, two secondary schools, three technical and vocational schools and four literacy centers were identified.

The Ministry of Public Health and Population is not represented in the commune of Les Anglais. There is a hospital with two doctors, one of whom is a graduate and the other a trainee.

The town of Les Anglais has four rivers, twenty-seven springs, a pond, two lagoons, fourteen wells and twenty-two public fountains. The commune of Les Anglais is not electrified.

The commune of Les Anglais is among the communes of the country which does not have a police representation. However, there is a court of the peace, a custody room and a registry office.

The court of peace falls under the jurisdiction of the civil tribunal of Les Cayes.

A creative community exists in Les Anglais, some of whom are inventors. For example, one inventor has built a stove that requires less fuel to operate. Named the Miracle Stove, it has allowed families to save money so they can spend on other needed items.

The post reaches Les Anglais on Monday at noon via Les Cayes and Tiburon, and leaves immediately by a special courier.

Les Anglais does not have telephone service. There is no radio station, no television station, no newspaper / magazine in the commune.

As for Leisure, the town of Les Anglais is not well provided. It has a theater room, a cinema room, one football (soccer) field and a public square. In addition, she celebrates her patron saint "Immaculate Conception" every December 8. 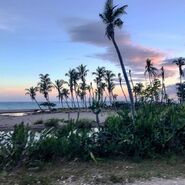 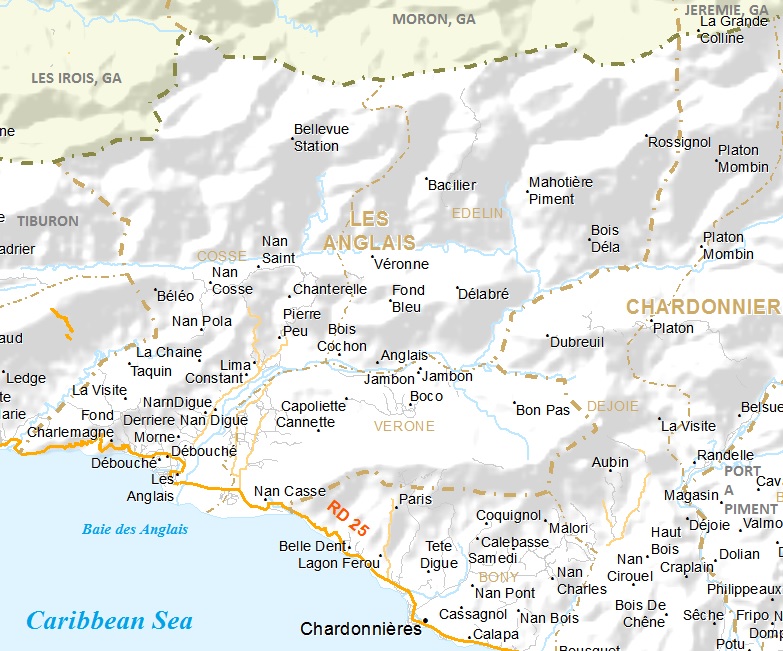 Retrieved from "https://haiti.fandom.com/wiki/Les_Anglais?oldid=27384"
Community content is available under CC-BY-SA unless otherwise noted.