Lacoma is a communal section of the City of Jean-Rabel in the Northwest Department of Haiti.

Lacoma is located between Port-de-Paix which is the capital of the North-West department and Jean-Rabel which is also part of the same department. Located approximately 24Km (15 mi) away from its capital and right in the middle of what is known as the Far West of Haiti, Lacoma’s distance from Haiti’s capital Port-au-Prince is approximately 167 km (104 mi). It is the first communal subdivision of Jean-Rabel, and is itself further subdivided into parts called “habitation”, listed below.

Lacoma's main watershed, the Lacoma River, which is resultant of the merging of 2 rivers: The Catinette River and that of Disputé. The Catinette River takes its source at a 500m (1,500 ft) altitude. After a journey of more than 15km, it joins the Disputé River (21km) to give birth to the Lacoma River. Overall, the banks of these rivers can cause lot of damages. The river of Lacoma is therefore subject to sudden and destructive floods, such as during hurricane Matthew in October 2016, water supply and irrigation system suffered heavy damage. Losses have been recorded, such as several heads of cattle were carried away during hurricane Matthew and any other major hurricanes.

Lacoma knows two distinct climatic regimes. A climate of altitude with an average annual rainfall ranging from 500 to 1200 mm of rain. During the dry seasons the wind blows very strong and the flow of springs and streams diminishes. Dry periods are detrimental to the development of agriculture. In the vast plain of Lacoma, farmers are forced to practice a rain-fed agriculture, that is to say, linked to the fall of the rain. In irrigated areas, the rate of water diminishes considerably and in this condition the way water is distributed often lead to conflicts between farmers. In addition, there is a shortage of drinking water during these periods. We also notice that the seasons are not always regular as rainfall varies from year to year. Over two consecutive years the same month may be dry or rainy.

Most people have a living through agricultural and trading activities. Lacoma has a flea market called “Marche Constantin”. Because of this market, Lacoma is considered as the main center of economic activities of the first communal subdivision of Jean-Rabel and an important one for the department. On Tuesdays and Saturdays, people come from all over the department and even from other departments to supply themselves and sell their products.

Advocacy for the restoration of the Lacoma's Constantine Market

With more than thirty markets, commerce is currently the main spearhead of the economy in Jean-Rabel, a commune in the North West Department. Despite its importance and growing scale, Lacoma's Constantine Market, besides being one of the largest in the department, is struggling so far to find the blessing of the various players in the country for its restoration. A bitter finding that is worrying especially as it deserves a quick response.

The Constantin market of Lacoma was founded under the initiative of certain inhabitants of the area supported by a Constantine Louissaint. Since then, it serves as a point of connection to all the merchants of the first section of Jean-Rabel and those of other sections nearby. Thanks to its construction in 2001, this market will grow to the point where it is positioned as a bridge between people from other municipalities such as Port-de-Paix, Chansolme, Saint-Louis du Nord and part of the department of Artibonite namely Anse-Rouge. Important in meeting the basic needs of different communities, Julie, a shopkeeper in the area, testifies:

"Since the creation of this market, we have had a surge of relief because we had to go very far to exchange our products. The trips were both dangerous and tiring. We had to spend several days on the road, sometimes without sleep, before arriving. Now, thanks to this market, we have the opportunity to buy and sell the goods without too many pitfalls. In addition, it helps us, against all odds, to assume our responsibilities as parents by ensuring the basic needs of our various children. "

Moreover, according to Jean-Rabel's Communal Development Plan (2012-2017), it is one of the three largest markets in the commune in terms of goods and capacity flows. Thus, it represents a great opportunity for the department, and the municipality in particular.

The market, a major concern

However, with a composition of two halls, a hundred sheet tents mostly straw, a slaughterhouse of more and less, the Constantine Market in Lacoma has become too small to reunite the population. The only water tank and public toilets are dysfunctional. The animal exchange area, the wager and the slaughterhouse share almost the same space. Generators sometimes diseases, the various problems intertwine to expose the malfunction of the market. Anita, a street vendor, explains:

"Sometimes, coming back from the market, I had headaches and fever because the place is not only dusty but also polluted with various types of waste. In addition, we face a very serious sanitation problem. We do not find places to meet our physiological needs. We are sometimes obliged to hide behind a tent to pee ... "

In addition, the bad positioning of the tents often creates an unparalleled traffic jam. A situation that is complicated with the intermingling of different services that prevents the free movement of everyone and also access to products. Nutrition services are subject to large waves of dust. In addition, a drop of rain can serve to hinder the normal operation of the market.

The restoration, a necessity ...

As a result, given its importance to the people of North Korea, the restoration of the market is a necessity. Through a global and inclusive restoration plan, the different actions should be able to take into account the enlargement, the layout and the good disposition of the different services without prioritizing the big traders to the detriment of small retailers. In addition, the new construction must contribute to providing an attractive living space for the population.

To this end, an appeal is made to the country's national and local authorities, the private sector and international organizations to join forces to rebuild this common good as important and necessary for the national economy as an efficient agricultural policy. Finally, the implementation of a management plan following a public / private partnership will help to make the Constantine Market of Lacoma viable and beneficial.

Being the first communal subdivision of Jean-Rabel, Lacoma is commonly referred to as the "capital". Lacoma has an area of 52 square miles (135km2) and a 2012 population of 27,427 inhabitants which give a density of 201 people per square kilometer. (Statistics are from “Plan Communal de Développement de Jean Rabel 2012 – 2017). In 2015, the district saw a drop in its population which has been recorded at 25,265 with a density of 187 residents per sq km or 486 residents per square mile.

One of the major concerns for the Lacoma environment remains of course that of deforestation. That phenomenon has very serious consequences on the fauna and on the agriculture. Some species of birds are becoming very rare. Agriculturally speaking, the deforestation make the seasons fluctuate so much that farmers cannot anticipate any rainy season. On the other hand, the non-protection of springs and streams makes water often unsafe and causes diseases for humans and livestock.

Lacoma’s roads do not escape themselves from the state of decay of roads in the department. That makes moving around Lacoma and generally around the department a calvary. In rainy season, no motorized means of transportation can be used and people are forced to go miles on foot or ride a horse or a donkey.

There is no reference structure for health care in Lacoma. The Mannacine Dispensary which is the only health clinic in the area, is unable to provide all services requested by patients due to material, financial and technical constraints. In this situation it is clear that the victims of cholera had difficulty in getting treatment. Because of this, patients are directed towards Port-de-Paix. Given the problem of moving around the department because of dusty roads connecting Lacoma to Port de Paix, some even die before having the opportunity to get help from a health agent.

Lacoma is supplied with drinking water by means of the Dispute water source. This water catchment was totally damaged by the Hurricane Matthew. Since then, the population has been barely able to find drinking water. Few of them are able to afford the luxurious choice of buying drinking water at Port-de-Paix and the rest of the population has no other choice than to supply water from the Lacoma River. It is predicted that it is going to be worst during the drought season which is coming since that will cause a decay in the rate at which the river is flowing. The population is motivated on rebuilding the water system in which they have been working for months. Given all kinds of difficulties they are facing such as hard working by hand because the absence of proper materials and tools, shortage of money no one can predict how long it will take them to have the water system restored.

The population of Lacoma has long lived in the dark (black-out). There are no sources of energy that serve the local population. We had four solar streetlights but now only 2 are left. One has been stolen and another is no longer working. This situation hinders the night life and forces the population to go early to bed.

Sport, especially soccer, is a prime factor in the life of the Lacomeans. In other words, soccer-related activities (local or regional tournaments, the broadcasting of international matches, etc.) always result in large crowds. Apart from soccer, almost no other sports discipline attracts so much interest and passion among inhabitants. On the other hand, it is evident that the sports facilities (football pitches) are not sufficiently well developed in a way to encourage the practice of sport. These are mostly unfenced or not suitable (No leveling ...). In some cases, they are rented spaces and are available only in dry periods where culture is not appropriate (eg, the ground in Nan Boule). Others, specifically the elders, are engaged in the activity of “rooster battle”. Lacoma has no formal restaurant, hotel, theater etc. In short there is no night life. Different religions are represented in the area like: Catholicism, baptism, seven-days Adventist etc.

Lacoma has the most fertile soil in the whole country even though deforestation and natural disasters such as hurricanes and floods unveil the land. Nevertheless, Comeans (people living in Lacoma) have the greatest hospitality ever in their hearts. During the summer for example, they organize memorable entertainments that keep natives and visitors stress free and in good spirit. Among these entertainments, we have soccer, flag, dominoes, folklore dances, and beautiful beaches to enjoy in the most incredible tropical sun of the Caribbean.

Therefore, in efforts to raise the life standards of the region, a group of natives creates “Avansman pou Lacoma” a nonprofit organization in order to change the region’s configuration. In gross, thru this organization, Lacomeans open their arms to the world seeking for help to better the lives of these inhabitants. 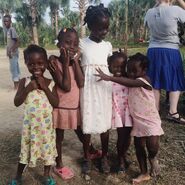 Lacoma
Add a photo to this gallery

Retrieved from "https://haiti.fandom.com/wiki/Lacoma?oldid=29071"
Community content is available under CC-BY-SA unless otherwise noted.