L'Asile (Kreyol: Lazil, English: "The Asylum") is a commune within the Anse-à-Veau Arrondissement, part of the Nippes Department in Haiti.

The city of L'Asile was built at the border of a traitorous jungle and is truly an ancient phenomenon. Its elegance is matched by the backdrop of an abundance of hills which have helped shape the city to what it is today. The climate these hills brought were of great importance, but they were also influential when it came to architectural designs as the vast majority of buildings have been built with the rustic elements of the hills around them. Some colonist, bored with an agitated life, came without doubt to ask for these solitudes an unknown peace, and they became "the asylum" of many misers.

In the center of these peaceful places, surrounded by high mountains, are the two chapels of Ville de L'Asile, the town's primary settlement. L'Asile's town center is a tiny isolated village off Route Nationale 2; an inland destination with overflowing rivers. It is marked by unpainted buildings, some with stain roofs, many surrounded by high land.

L'Asile locality is about 190 km (118 miles) southwest from Port-au-Prince, in the Haiti department of Nippes. Together with the localities of Tournade, Changeux and Morriseau, it constitutes the consolidated Commune of L'Asile. As of the 2015 census, the population was 41,000.

L'Asile became an independent municipality, formed by the splitting from of the commune of Anse-à-Veau. Raised to the rank of commune in 1934, it is an interior (inland) town.

The name "L'Asile" is adopted from the French language meaning "The asylum". An asylum is a place of refuge where one finds safety and protection

• In 1886, General Prudent, commander of the district of Nippes, threw a bridge that bears his name on the river Nippes.

This commune is located in the midst of mountains of various forms. It is a real oasis with the most rustic views.

The soil of these rural sections, like that of the plateaus of our montagues, is composed of a rather compact clay, generally reddened by iron oxide. There are outcrops of coal, and in the bed of the river, here and there, pieces of coal driven by the current. One of the boundaries of the district of Aquin comes south of the rural sections of the Azile ending at the place where the river Mahot flows into the Serpente, and then follows the south bank of this river to the source of that of the Fond-des Nègres. From there, following this river again to the place where it flows into that of the Côtes-de-Fer, at the mouth of which it will end.

"The valley of Azile, of the Anse a Veau, one of the most fertile in productions of all kinds, leaves to rot its exquisite coffees, its delicious oranges, because it can not go to sell its crops in Aquin or at L'Anse-a-Veau.

Regarding the economic and financial infrastructure, the municipality is virtually devoid of it and in terms of economic activities, agriculture and livestock are predominant. Among the several small shops located in the city of L'Asile (VAL), the town is almost completely devoid of commercial establishments, other than a photocopy service and a hairdresser. The main markets of the town include Paul, Moinseau, and Morne Oco in the first section, Changeux and Fleurent in the second section, Marche Astruc in the third section, and Morriseau and Beaudrouin in the fourth.

L'Asile is surrounded by hills and many families make do with thatched-roof dwellings. For those who are able to afford the material, they build tin-roofed abodes. But whatever kind of housing they reside in, the population does not have either running water, or a dependable source of electricity.

Not surprisingly, L'Asile's road infrastructure is nearly non-existent, and the few roads available that have been built are unpaved. Automobiles are also scarce in this primitive place.

The Ministry of National Education of Youth and Sports has been represented in the commune for over forty-four years. Two people are currently staffing the office. From kindergarten to the end of secondary school year, there are schools for these grades in the town. After the private schools, there are public schools, there are communal schools and the “Lise Gwoman Lazil” (The Gwoman High School of Lazil). Many children in Lazil walk more than four kilometers to come to school; despite of this great sacrifice, we learn that there are about half of the children who stay home, either for economic reason or because of responsibilities that fall on their shoulders at home such as, taking care of livestock, going to the farms or busy with market activities.

The Ministry of Public Health and Population is not represented in the commune. L'Asile does have a main hospital, but it is under-equipped and dependent on aid relief for such necessities as antibiotics, sterilization, and intravenous drip supplies. This clinic is responsible to take care of the whole commune, including some other people who sometimes come from more than 6 kilometers away to come to the clinic for health care. The result has strained the hospital's limited capabilities, but the medical facility has managed to remain open.

When nothing can be done for a sick person, they send that person to either Bònfen (Bonne fin) or Fondènèg (Fonds-des-Nègres).

Two dispensaries were also located in the commune. The health service is provided in the area by one doctor, one nurse, three auxiliaries and a laboratory technician.

In terms of technical infrastructure, the community of L'Asile has three rivers and seven sources. For electricity and communication, only the city (VLA) is electrified by an electric motor under the direction of the town hall.

On the side of religion, many faiths were counted in the commune. The number of churches (chapels included) appears to be more numerous for Catholics, Baptists and Pentecostals.

More than three-quarters of L'Asile's residents practice Catholicism with the remaining 25% either Protestant or Vodun adherents. The Roman Catholic Church of St. Joseph's overlooks the village.

As for Leisure, the town has no library, no museum, and movie theater. Football (soccer) is played on one field in the city of L'Asile, and twenty-one gauntlets run daily in the town. In terms of cultural heritage, the town has no monuments and sites, there is only one place of pilgrimage which is located in the first communal section.

The telephone service is provided by four employees. Thirty-four lines are available, but only three of them operate as a booth at the Teleco office itself. There is only one factor where people go to pick up their mail. Apart from a radio station located in the city for about two years the town of L'Asile does not have a television station or newspaper / magazine.

But though L'Asile's people endure hand-to-mouth living standards, they receive visitors to their village with warm and open hearts. 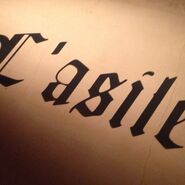 Music of the Heart LAsile