Ferrier (Haitian Creole: Ferye) is a small city contained within the Fort-Liberté Arrondissement, part of the Northeast Department of Haiti. It is Haiti's northeasternmost commune.

Located in the northeast corner of Haiti, it was also called Ferrier-Lassale and was dated in 1839 a district of the Fort-Liberté Borough. It was established as a section in 1932 and originally named Maribeaux. It was raised to the level of a commune in 1946.

• On May 7, 1911, Ferrier and Capotille took up arms against President Antoine Simon at Ravine-Baptiste, a position located near Ouanaminthe.

According to the IHSI, the commune has a total area of 70.00 square kilometers (27.03 square miles), of which 68.92 km² (98%) is rural and suburban, and 1.08 km² (2%) is urban. The commune of Ferrier has one only communal section. It is geographically interior and its dominant relief is the plain. Its inhabitants are called Ferrois.

Ferrier is located at 19.6172° N, 71.7815° W. The town's eastern border is the international boundary line. It is bordered on the north by the Bay of Mancenille, on the east and southeast respectively by the Dominican towns of Pepillo-Salcedo and Dajabón, on the south by the city of Ouanaminthe, and on the west by the city of Fort-Liberté. The town's population is mostly concentrated in the center, La Ville de Ferrier, and its villages, Merande, Bossous and Artaud.

Ferrier has a tropical savana climate, according to the Köppen-Geiger climate classification, typified by rainy summers.

In terms of economic and financial infrastructure, the municipality has only one credit union.

Agriculture, trade, livestock and fishing are the main economic activities of the municipality. Two food supply centers and three depots form the commercial establishments. The town has no petrol station and private morgue, but it has two pharmacies located in the health centers.

Farmers in Ferrier engage in sustainable farming. They produce oranges, tobacco, and limes, as well as livestock, to provide for themselves. The land in Ferrier is inadequately irrigated, but is a good place to grow rice, and has received funding from non-government organizations (NGO) to do so.

Infrastructure in Ferrier is underdeveloped. Road systems barely exist and footpaths are very popular, as indicated by the red dashes on the map. The nearest airport is Cap-Haïtien International Airport.

Route Nationale 6 skirts the town's southwestern border for about 1 kilometer.

The Ministry of National Education of Youth and Sports is not represented in the commune of Ferrier. There is no kindergarten. Three public, several private and four congregational primary schools have been inventoried in the commune. At the secondary level, one public and one private, have been identified. There is also a vocational school and thirteen literacy centers. The commune has neither university nor higher schools.

The Ministry of Public Health and Population is not represented in the commune of Ferrier. Two auxiliaries and three health workers train the health staff of the commune. The people in Ferrier also lack a hospital. To get medical attention, they must get to the nearest medical facility located 30 miles out of town in Milot

For water availability, the town of Ferrier has nine rivers, two springs, a lake, eight lagoons and public fountains with close to thirty pumps and faucets.

The commune Ferrier is electrified by the power station of Carrefour Chivri. Some places like Ferrier Center and the town of Meillac are also electrified by means of solar panels. 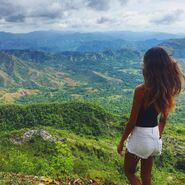 Meillac; a district of Ferrier

Another house in Ferrier
Add a photo to this gallery

Nearly 19 churches (chapels and temples included) have been inventoried in the commune of Ferrier.

There is no political representation in the commune. However, three grassroots organizations, five farmer groups, five women's groups, two non-commercial cooperative centers, an international organization and three NGO's were identified. During the aftermath of the 2010 earthquake, a population of several hundred survivors fled to Ferrier. They were originally from Ferrier and had migrated to Port-au-Prince seeking work. In an effort to ease the burden of accommodating the dramatic increase in Ferrier's population, NGOs have been working proactively to convince the returnees to take up rice farming. They are supporting them with food and money, putting them to work in rice fields, in order to give them a means of income.

At the time of the inventory, apart from a postal office, the commune had no telephone. There was also no radio station, newspaper / magazine, TV station etc.

As for Leisure, the town of Ferrier has a library and a cinema. However, there is no museum or theater. For cultural heritage, the town has four monuments and Colonial sites. The only sports practiced are football (soccer) and basketball.

Retrieved from "https://haiti.fandom.com/wiki/Ferrier?oldid=29994"
Community content is available under CC-BY-SA unless otherwise noted.