Delmas is a commune in the Western Department of Haiti. The city is part of the Port-au-Prince metropolitan area.

Situated directly east of Port-au-Prince, across the canal, Delmas, represents the central lengthwise portion of the highway and linear region of the same name in Port-au-Prince metro area. Delmas is home to some of the region's most iconic development, and it contains popular commercial zones such as Marché de Delmas.

According to the 2015 census, the city's population was 395,280. As of July 2015, it was the third most populous city in the country, behind Port-au-Prince and Carrefour. Delmas is coterminous with the communal section of 1re Saint-Martin, and within the municipality exist several hamlets and villages such as Puits Blain, Cité-St.Georges, and Chancerelles.

Land in early Delmas was used primarily as grazing commons and small farms. The name is derived from the French de la mas ('small farm'), after a farm in France. After the centralization of the country's population during the 1960s, large-scale migration transformed the landscape. Up until 1983, Delmas was a neighborhood that belonged to the municipality of Port-au-Prince. It was raised to the rank of commune with the decree of December 15, 1982. The land is mostly flat and its climate is normal. Its inhabitants are called Delmasien.

The commune of Delmas in the Ouest Department is known as the "extension" of the Haitian capital of Port-au-Prince. Once covering 80 square kilometers of land, Delmas is part of the capital's expansion and is now housing some 400,000 residents.

Delmas is about 1.5 miles (2.4 km) east of Port-au-Prince on the Autoroute de Delmas. According to the IHSI, the commune has a total area of 27.74 square kilometers (10.71 square miles), 100% urban. The city is bordered on the north and east by the town of Tabarre, on the southeast by the city of Pétion-Ville, on the southwest by the city of Port-au-Prince, and on the northwest by the commune of Cité Soleil. A creek, along the southern border, and several others, is among the major streams in the city.

Delmas has one communal section:


Subsequent to the 2003 Census, the area of Delmas commune was significantly reduced by the creation of two new communes - Cité Soleil and Tabarre - substantively carved out of the area of the former Delmas.

Delmas also generates some employment opportunities to its residents. Thanks to a high number of industrial and commercial businesses in the area, there are some jobs available for seekers. The employment status and opportunity in the town are decent because enterprises invest in it.

In addition to being the place of concentration of the industries, the commune of Delmas becomes day by day a privileged center for the trade. In terms of commercial / economic establishments, over 200 building materials and hardware stores, hundreds of food stores, over 100 largr shops, three hundred and seventy (370) depots (cement, soft drinks etc.), seventeen gas stations, two private morgues, thirty seven pharmacies, 15 photocopying services, over 20 beauty studios, eleven phoptography studios and fourteen dry cleaning were counted in the municipality.

Autoroute de Delmas (Delmas Highway) is the largest business district in the country and ranks among the most expensive and intensely used pieces of real estate in the Caribbean. While Port-au-Prince is the main administrative center, Delmas itself is an urban continuation of the capital city. Delmas is also a growing commercial and industrial center, the location of much of the area's enterprise.

The majority of Greater Port-au-Prince's residential areas, including its most modern settlements and residential units, lie within Delmas. The area hosts commuters and residents working in its offices, hotels, and retail establishments and is populated by many tourists, visiting residents, and students. Marché de Puits Blain, iconic as the commune's "main village", is the popularly recognized hub of Puits Blain, one of the region's busiest villages, and a major center of the country's market industry. Delmas holds several of the area's major markets.

The best thing about Delmas is the maintainance of its roads. Unlike other towns and cities in Haiti, Delmas features an efficient and useable road network. Its road network provides links to the major highway of Route National No. 1. It also makes it easier for motorists to travel to the Toussaint Louvre International Airport, providing simple access to air travel.

The Ministry of National Education of Youth and Sports is not represented in the commune of Delmas. The commune provides numerous kindergaten, both private and congregational, and numerous primary schools, both public and many private, were inventoried in the commune. As for secondary schools, three public, one congregational, along with several private and one mission were identified. In addition, there are nearly eighteen vocational schools, two universities and five higher schools.

The Ministry of Public Health and Population is not represented in the commune of Delmas. Several health establishments were counted there: nine hospitals including six private and three public, four health centers (2 with beds, two without), 18 clinics and four polyclinics. Nearly 200 doctors, seven dentists, numerous nurses, auxiliaries and laboratory technicians train the medical staff of the health establishments of the commune.

Regarding the availability of water, apart from the district of the Croix-des-Missions, the town is almost deprived. Efforts have been made by officials in recent years to provide the town with a good drinking water supply structure. Almost all the town is electrified. The frequency varies according to the zone.

For administrative and judicial infrastructures, the commune has a police station and three sub-police stations. There is also the large vehicle circulation office, a court of the peace and a registry office.

Despite of it, Delmas continues to fare well. Some of its residents practice vodun, while most of its residents are Christian believers. Ninety-six temples have been listed in the commune, Pentecost churches were the most numerous at thirty five in total. In fact, Mayor Wilson Jeudy, a Christian believer, once entrusted the entire country to the Lord. During a crusade, he prayed for the country amid the calamities and challenges it faces. This gesture simply showed the mayor's faith in God.

The municipality has a postal office that offers two types of service: at the post office, boxes are available where the customer can come to collect his letters and at the same time employees ensure the distribution of letters within the municipality. A telephone office, eight radio stations, and two television stations were also counted in the municipality.

As for Culture and Leisure, the town has a school library not accessible to the general public and a cinema room. The sports practiced in the municipality of Delmas are football (soccer), volleyball, basketball, tennis, athletics, dance and martial arts. Ten nightclubs, dancing restaurants and two gaguères have been listed in the municipality. The commune of Delmas has several parishes that regularly celebrate their patron saint. We can mention: Our Lady of Altagrace at the top of Delmas, Saint Yves at the bottom of Delmas, and St. Claire Little Place Cazeau, amongst others.

Kids shopping for their families at Delmas 2000 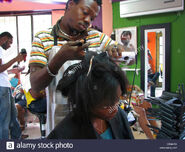 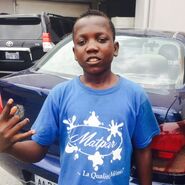 A young girl in Delmas 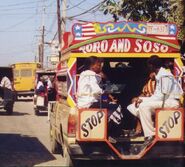