Cornillon (Kreole: Kòniyon) is a commune in the Western Department of Haiti. The population was 59,660 at the 2015 census. It is part of the Croix-des-Bouquets Arrondissement. The town is on the DR-Haiti border and is a border town with La Descubierta, Dominican Republic.

Cornillon is located in the Trou d'Eau Mountain Range in eastern Haiti. The Gascogne River runs through it. It is the third largest municipality in the Croix-des-Bouquets Arrondissement. The city is famous for its proximity to the mountains and the sea, as well as its climate which is an eternal spring. Approximately 50,000 people live in Cornillon while the Croix-des-Bouquets Arrrondissement had a 2015 population of over 500,000 inhabitants.

Cornillon was originally a habitation located in the rural section of Plaine-Céleste. Prior to incorporation, the area was known as Grand-Bois. "Climate of Europe, pure air, poetry, etc.", said Ducas Hyppolite to Frederique Marcelin about the region. "What sites! What military positions! It is wonderful!" The town was founded in 1888 and raised to the rank of commune on the same date. Knight. dwelling located in the rural section of Trou d'Eau, commune of Grands-Bois, on which.

• In 1803, under the government of Rochambeau, a native prisoner named Chevalier, a man of color, stationed on the deck of the ship Duquesne to the Cape, was shaken at the sight of death. His wife, who was at his disposal, asked him if it was not glorious to die for liberty. To raise her spirits, she passed herself the rope around her neck, and gave herself first to the executioner. This beautiful action of a woman deserved to be reported.

An adjutant general named Chevalier is one of the signatories of the act of independence.

According to the IHSI, the commune has a land area of 223.24 square kilometers (86.19 square miles), of which 168.75 Sq.km (76%) is rural, 53.62 Sq.km (24%) is suburban, and 0.87 Sq.km (<1%) is urban. It is bordered on the north by the Central Department town of Savanette, on the east by the town of La Descubierta, on the southeast by the city of Jimaní, on the west by the town of Thomazeau, and on the northwest by the Central Department city of Mirebalais. The town of Cornillon has five communal sections and witnesses tropical wet and dry weathers. The town's southern border is the DR-Haiti international boundary line, with two of its communal sections touching the border. Its inhabitants bear the name of Cornillonais.

The town has experienced widespread deforestation. This is because settlements were needed. Deforestation was also done in order to give way for more charcoal production. Such production is one of the main sources of income in the town because the demand for coal is high across the country. Because charcoal is the primary source of fuel in Haiti, charcoal product has become one of the highest income-generating livelihoods, especially in Cornillon. However, people do not only rely on charcoal production to make ends meet. They also produce fruits and coffee. Without agricultural and charcoal productions, residents will probably find it more difficult to get by as the town is not as wealthy as the other cities in the country.

The municipality of Cornillon is one of the poorest in the department. Trade, livestock, handicrafts and fishing are the main economic activities of the municipality. However, apart from a few small shops (small Yoshino), the municipality has no economic or commercial establishments.

On a recent visit to Cornillon, a town in the west department county of Croix-des-Bouquets, the Haitian head of state, President Michel Martelly made gifts to the long-standing town. On the occasion of their 125th anniversary, the residents of Cornillon were treated to a distribution of agricultural equipment from their president, one of whose mandates is the advancement of the Haitian agricultural sector.

The tools were given to local farmers who make their living farming cash crops such as coffee and fruit. As such, his stated intent was to assist them in making more bountiful harvests. However, as it stands, even with these new tools, farmers in the community of Cornillon still find it hard to eke out subsistence because of other, chronic problems plaguing the area.

With regards to road construction, Cornillon has many dirt roads. Loose gravel was used in some roads to pave them but the roads are generally underdeveloped.

Lionel Ducasse, mayor of the town, and his Deputy, Lamarre Baptiste took the opportunity of having the president's attention to lay before him the true needs of their town. A lack of health facilities and opportunities for university study--addressed by the offering of three university scholarships to resident students, are outstripped by the community's lack of proper roads. Bigger than an inconvenient ride, the state of the roads leading to Cornillon make it a semi-remote location and hinders the trade needed for the livelihood of their farmers.

As explained by Ducasse, because their roads are so hard to traverse, their trade prospects are limited to what they can barter with those from the Dominican Republic, who, they state, don't always trade for a fair price. It was asked of the president to add to his Cornillon agricultural endowment, 52 km of road to connect Cornillon with the rest of Haiti.

The Ministry of National Education for Youth and Sports is not represented in the commune of Cornillon. Several, mostly private primary, schools and two secondary schools were inventoried in the commune.

The Ministry of Public Health and Population is not represented in the commune of Cornillon. The commune has two clinics and a bedless Health center. Two Doctors, five Auxiliaries, fifty Eight certified Matron, and a Laboratory technician form the health staff of the commune.

For water availability, the municipality of Cornillon has two rivers, twenty-nine Springs, seven ponds, two lagoons and public fountains with more than a dozen taps. In the fifth section of Génipailler, a Protestant mission allows a limited number of people to benefit from the electric current at times. In town the police station alone is electrified by means of an electric motor.

Nearly 230 temples (chapels and resorts included) have been inventoried in the commune of Cornillon. The majority of this workforce is made up of small assemblies that do not really have adequate structures. Most of these small assemblies are ranked as the churches of God.

At the time of the inventory the municipality did not have a telephone or a Postal office. There is no Radio station, newspaper/magazine, nor television station.

As for Culture and leisure, the commune of Cornillon has no library, museum, theatre and cinema. The only sport practiced in the commune is the football (soccer). Seven Gaguères come to complement the meagre places of entertainment of the inhabitants of the commune. With regard to cultural heritage, we find ancient colonial houses and above all a natural site (Tourine) that receives the visit of many people at the time of the patronage feast. It should be noted that at the time of the inventory a person aged 124 years, two others aged 109 and 100 years respectively were listed in the municipality. 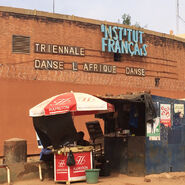 Dance studio
Add a photo to this gallery

Retrieved from "https://haiti.fandom.com/wiki/Cornillon?oldid=29228"
Community content is available under CC-BY-SA unless otherwise noted.