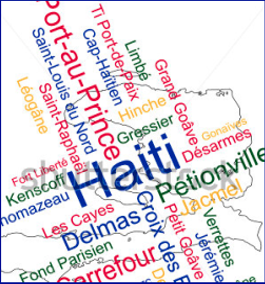 Like Port-au-Prince, all the other major urban centers are located on the coast, reflecting their origins as ports during the colonial era. The French founded the northern city of Cap-Haïtien, once known as Cap-Français, in 1670. This coastal settlement quickly prospered, and during the 18th century enjoyed a golden period, serving as the port and commercial center for the immensely productive plantations of the Plaine-du-Nord. From the time of the Haitian revolution, however, what was said to be the most attractive city outside France entered into a steady decline. In 1802, Henri Christophe, leader of the revolutionary black army in the north, burned the city down rather than let it fall into the hands of the approaching French forces. Although rebuilt and renamed, first Cap-Henri and then Cap-Haïtien, the city never recaptured its former glory. An earthquake in 1842 and then a hurricane in 1928 inflicted new destruction, and hastened city's demise. Today, though it is still the most important urban center in the north, with a population of about 300,000, Cap-Haïtien is a rather quiet and relaxed town.

Historically, the business activity in the regional centers did operate autonomously. There is a great amount of anecdotal evidence of previous business activity linking the secondary cities with rural areas, to serve domestic and international markets. Cities outsIde of Port-au-Prince were focal points of entrepreneurshIp and local governance, and possessed an entrepreneunal and intellectual population that contained strong cosmopolitan elements. Much of this activity and resource base collapsed or was drawn in to Port-au-Prince as services and policies became centralized, and as the infrastructure outside of Port-au-Prince crumbled. Planning efforts, such as the Transport Master Plan, encouraged thIs centralization. The construction of the flour mIll at Port-au-Prince, and the consequent requirement to purchase flour mIlled in Port-au-Prince, reportedly caused significant damage to the economy of the Les Cayes region.

Other port towns enjoyed something a boom time in the 19th century as those with assets and capital congregated there, and grew rich from the control of agricultural exports. This trade generated great incomes for the new urban elite, and Jérémie prospered from exporting cocoa, Jacmel from coffee, Gonaïves and Saint-Marc from cotton, and Port-de-Paix from logwood. The fortunes of these once bustling and thriving port towns, however, declined in the 20th century as a consequence of the vagaries of international demand for the products they exported. When Francois Duvalier made Port-au-Prince the only official port, they entered an economic and social torpor that exists to this day. Over recent decades, only the regional administrative and Commercial centers of Les Cayes in the south, Gonaïves in the center and Cap-Haïtien in the north have seen any significant growth in population size.

Retrieved from "https://haiti.fandom.com/wiki/Cities_and_towns_of_Haiti?oldid=29880"
Community content is available under CC-BY-SA unless otherwise noted.