Carrefour (Kreyol: Kafòu) is a suburban city in the Port-au-Prince Arrondissement, in the Western Department of Haiti. It is approximately 10.5 miles (17 km) southwest of Downtown Port-au-Prince and is bordered by Port-au-Prince's Turgeau and Martissant neighborhoods to the east and south, respectively, and by the hinterlands of the Jacmel commune to the south, by the suburb of Gressier to the west, and Port-au-Prince Bay to the north. Rather than having a single city center, Carrefour resembles a patchwork of thirteen villages. According to the 2015 Census, the population of Carrefour was 511,000, making it the second-most populous city in the country. 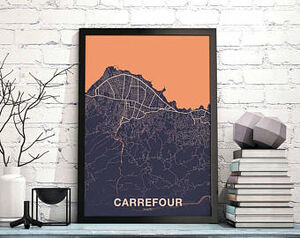 Carrefour is directly west of Port-au-Prince city limits and therefore also within the Port-au-Prince metropolitan area. The commune is one of the eight communes that occupy the area, together with Gressier to its immediate west. 13 communal sections, 61 localities, and more than 60 unincorporated hamlets are located within the commune. There is a public school district within the commune. Post office districts and school districts use the same names as a city, hamlet, or village within them, but each sets the boundaries independently.

Spread over an area of just above 60 square miles, Carrefour was founded on May 1st in the year 1813. The region celebrated its bicentennial year a few years ago. With a population of close to 400,000, the community of Carrefour houses people who share similarities in a lot of things, especially interests, possessions, resources and income.

The commune of Carrefour was originally a military post in the district of Port-au-Prince. On May 1, 1813, by decree of President Alexandre Petion, the village was founded. President Petion, one of the foudning fathers of the Haitian Republic built his private residence in Carrefour, particularly in the locality still called Thor (Thorland). He resided in this house that is now L'Ecole Nationale de Thor on Thor 10.

Following a plan drawn by the surveyor Louis Riguad, the village consisted of seven blocks, 20 blocks, and 162 locations. For over a century and a half, Carrefour has never been urbanized as desired by its founders. Its agriculture took precedence over its urbanization. It was not until the mid 70's that uncontrolled urbanization of the area began in earnest.

Carrefour has been the incubator of many anti-government insurrections in Haitian history.

Estimates suggest the commune of Carrefour has a population of more than 500,000 inhabitants. More than 90% of the territory of the municipality is in its communal sections (outside the city center, but within city limits). The people who live in communal sections hardly exceed 20%. So the urban center of Carrefour is a megacity.

Located in Diquini shortly after the Diquini Adventist Hospital, the Carrefour town hall, since its creation in 1982, operates like all other town halls in the country. In these conditions, the municipal administration is invisible and exists only by name. As a result, everything works according to nature. As for taxpayers, they receive no service from their city hall and are virtually left to their own devices.

The very location of the town hall of Carrefour allows the informed observer to conclude that this box has nothing to do with the rest of the town.

Those who lived in Carrefour before the implementation of the 1987 constitution will tell you that the communal administrations of that time were much more responsible; their presence was felt at least in the urban area of ​​Carrefour.

If we were doing an investigation at Carrefour today, the majority of people living there would not be able to answer the following question: "Where is the Carrefour town hall? Similarly, one would be surprised to find that most people think that the mayor of Port-au-Prince is the one in charge of Carrefour. In other words, the Carrefour town hall only exists in name.

The Ministry of the National Education of Youth and Sports is represented in the commune of Carrefour by a district office of school Inspection. Over 100 Kindergartens, mostly private, and one congregational, five public and many private primary schools, and seven congregational were Inventoried in the municipality. Numerous secondary schools including three public, numerous private, and two Congregational; eight vocational schools, two universities, and eight higher schools were also inventoried.

Collège de Cote-Plage is a private institution of basic and secondary education. Its quality-oriented public services are offered for profit to a clientele made up of schoolchildren and schoolgirls from the Carrefour Commune and surrounding areas. Since its founding in 1978, it has carved out a place for itself in the preparation of young people whose social integration is effective and the insertion on the labor market both in Haiti and abroad remains unquestionably proved. Each year, its thousand students are served by a staff made up of teaching professionals from the École Normale Supérieure, the teachers 'and teachers' colleges, and training centers for the teaching profession. From one year to the next, his performance on state examinations at all levels makes him deserving to be ranked by the Ministry of Education among the most successful schools in the country with success rates above bar of 90% for the baccalaureate. As for its success in the state exams in the sixth year and in the ninth grade, it has been around 100% for a good ten years now, with a score of 98% twice only.

The Ministry of Public Health and Population is represented by a communal office located within the hospital itself. 97 doctors, nine dentists, 49 nurses, 110 auxiliary, Seventeen certified Matrons and thirteen laboratory technicians provide health service at the communal level.

The municipality has five rivers, more than five hundred springs, and 104 wells and public fountains. Almost the entire urban area of the commune is electrified.

At the level of administrative and judicial infrastructure, the municipality has a police station, a peace court and a civil status office.

Almost 152 churches (chapels and temples included) were listed in the commune of Carrefour. The Baptist churches proved to be the most numerous, being 52 in total.

The commune has a telephone service, a postal service and two evangelical radio stations. One of them, Radio Lumiere, with its various networks covers a wide area.

The municipality has a library and a cinema; on the other hand, it has no museum, nor theatre. The town has five night-clubs and 48 gaguères. There are no public places inventoried in the commune. Sports are football (soccer), basketball, tennis, volleyball, athletics and swimming. In terms of monuments and sites, the municipality has a natural site, a cave.

For a city of this size, Carrefour needs a municipal administration that lives up to this delicate task. This team must be creative, competent and progressive. In fact, this administration will have the mission of creating the conditions and taking the necessary measures to launch the commune of Carrefour on the path of modernity and socio-economic progress.

Retrieved from "https://haiti.fandom.com/wiki/Carrefour?oldid=29143"
Community content is available under CC-BY-SA unless otherwise noted.