Camp-Perrin (Kreyol: Kanperen) is a suburban city in the Les Cayes Arrondissement, Southern Department, with a population of 45,043 at the 2015 census.

The city lies about 222km (138 road miles) west of Port-au-Prince. Although it is a part of the Hood Massif region, Camp-Perrin is located just 22km (14 miles) from the sea. The city is connected to the coastline by Route Nationale 7, a paved highway that runs from Route N2 in Les Cayes to Route D72 in Jérémie. The city is bisected by the South Ravine, whose source was once equipped with a canal system with locks which supported the overflow of this river during floods. Its operation today is affected by land relationship. In 2013, Camp-Perrin was ranked No. 4 by MondoBlog magazine, on its Top-ten annual list of the "most beautiful communes" in Haiti.

Three Perrin brothers who were Frenchmen arrived here during the 18th century. They wanted to study the possibilities of growing coffee and cotton. They also wanted to explore the use of indigo and the dye of Campeche wood in Haiti. The city was thus created in 18th century.

Up the hill they built a camp, and Haut-Camp and Bas-Camp the two district towns came into existence. Perrin is subdivided into three communal sections namely, the second section - Champlois, the first section - Levy-Mersan and the third section - Tibi-Davezac.

Formerly, Camp-Perrin was called Perrin. The city was founded in 1930 and raised to the rank of commune in the same year. Prior to it's founding, it was the 5th and 6th sections of Les Cayes.

Camp-Perrin is located at 18.3272° N, 73.8610° W (73.86667°W﻿ / 18.31667). Located thirteen miles northwest of Les Cayes, near the intersection of Routes 7 and 2, Camp-Perrin's location has been an important factor in its economic and social history. Camp-Perrin is located in southwestern Haiti, bordered by Maniche on the east, Les Cayes on the east and southeast, Torbeck on the west, and the Grand-Anse town of Pestel on the north. Camp-Perrin is 75 km (47 miles) southeast of Jérémie and 220 km (126 miles) from Port-au-Prince.

The town is inland, the dominant relief of the city and the first two communal sections is the plain, while hills dominate the 3rd communal section. The climate of the commune of Camp-Perrin is normal and its inhabitants are called Camperinois.

At the level of economic and financial infrastructure, there was a hotel, 2 restaurants, a reception center, 3 credit unions and 5 marketing cooperatives. In addition, four food stores and two building materials were inventoried in the town.

There are deposits of coal in the ground at Camp Perrin. In 1881, the government had conceded the exploitation of it to a Frenchman, M.A. Strauss, but the lack of capital prevented the opening of the works, and the contract in question became null because of its inexecution.

The area of ​​the lignite mine, according to Eugène Nau, is 1,000 square kilometers (386 sq.mi.). On the instigation of R. Fr. Weik, of the minor seminary, St. Martial College, several samples of this charcoal were sent to the Antwerp Exhibition. Formerly known as the Source of the South Ravine at Camp Perrin, a canal with a sluice called the Davezac Canal, where the overflow of the waters of this river at the time of the floods flowed.

The Ministry of National Education of Youth and Sports has been represented in the municipality for five years by a school inspection office. Eight employees are the staff of this office. Fifteen kindergarten, several primary schools (including pre-school level), secondary schools, and three technical and vocational schools as well as three literacy centers have been identified in the commune. However, there is no university or other higher schools.

The Ministry of Public Health is not represented in the commune of Camp-Perrin. One health center, three dispensaries and a clinic form the health establishments of the commune. The medical staff of these institutions is composed of three nurses, sixteen auxiliaries, a certified matron, three laboratory technicians and three agents of health.

In terms of water resources, the municipality has six rivers, three springs, a pond and public fountains equipped with at least fourteen taps. Part of the town is electrified by a hydro-electric group and an electric motor (diesel).

On the religious side, nine Catholic churches (including chapels), eight Baptist churches, three Adventist temples, eight churches of God, two halls of the Kingdom Jehovah's Witnesses and thirteen other churches were inventoried in the commune.

The telephone service is provided by a staff of six employees. The number of available lines is twenty-five, of which twenty were functional at the time of inventory. The postal service exists throughout the municipality. Mail delivery is done on foot. There are five radio stations transmitting in the FM Band and TELE LA BRISE, as well as one newspaper in the commune.

People living in Camp-Perrin can hear many of the radio stations including Radio Ginen, Radio Macaya, Radio Lumière and Radio Nami Inter. In Camp-Perrin, even TMS and TNH have a partial coverage.

As for Leisure, the commune of Camp-Perrin has a library, two theaters, two cinemas and five football (soccer) fields. In addition, there is a public square, four gâgeres and six night clubs.

Sightseeing opportunities in Camp Perrin include the Saut-Mathurine waterfall, lush green vegetation, exotic birds, beautiful flowers, plants and ruins near Mercen. Summer homes for the wealthy and seminary homes can be seen here. Les Cayes Airport is the nearest airport to Camp Perrin and is located at a distance of 9.7 km. Sugarcane, cacao, vegetables, Cayenne pepper, bananas, tobacco and coffee are the local products traded in Camp Perrin.

Situated in Camp-Perrin, you will find the Recul Hotel owned by Valery Numa, a Camp-Perrinienne, and journalist of Radio Vision 2000. Recul Hotel is equipped with large conference, seminaries, shows, meetings and reception rooms.

Venel Remarais - a CEO of Le Recul Hotel-Restaurant and Radio Platinum, an anchor of Vision 200 and journalist 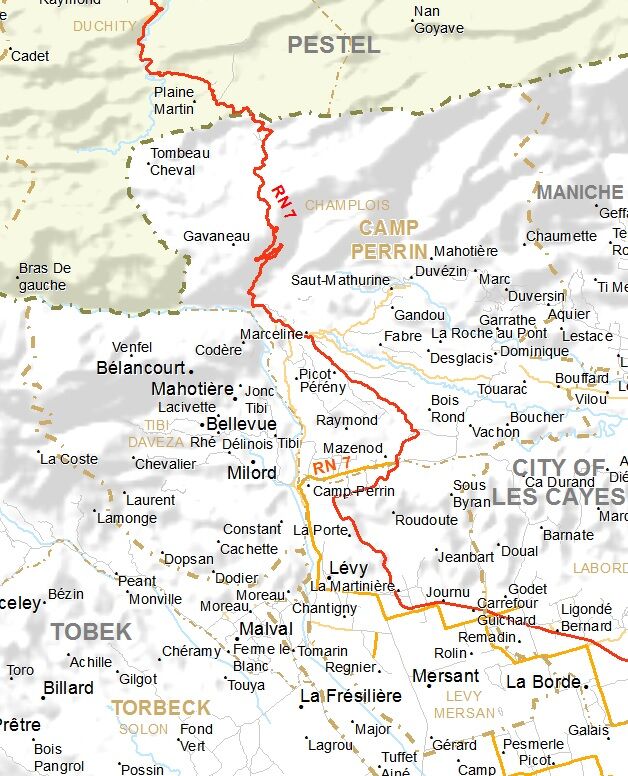