Côteaux (Kreyol: Koto) (English: The Coasts) is a commune and the seat of Côteaux Arrondissement, in the Southern department of Haiti. In 2015, it had a population of 21,302 inhabitants.

Côteaux is located at the southwest tip of Cape Tiburon, and has historically been a religious fishing community. First settled in 1726, Côteaux is one of the oldest cities in Haiti. It was only a district at the time of independence, and sheltered the seat of the Diocese which extended from Tiburon to Aquin. After independence, it became a municipality and subsequently head of the Les Côteaux Arrondissement. The city will soon celebrate its tricentennial.

Côteaux was incorporated as a town in 1826 (some sources say 1816) and has become a resort area. Agricultural products and beautiful landscapes constitute a windfall that the inhabitants of Côteaux exploit for the benefit of the tourism and the faith of the faithful Catholics. Houses in reconstruction, hotels under construction, and street adoquinage (street construction using concrete blocks) have improved the economic climate. There are three sections that comprise the town, those being Condé, Despas, and Quentin. A popular attraction is the 500 steps, dedicated to the Virgin Mary.

It is believed that the Virgin hears and grants the prayers of believers, especially women. In order to reach the shrine where the Miraculous Virgin can be found, people have to pay a pilgrimage and climb a 500-step stair. Going to the shrine through the long stair is almost the same as scaling the popular Great Wall of China.

•In 1791, the freedmen of Côteaux were so powerful that the whites who lived there had never been able to send deputies to the colonial assembly.

•The first citizen who introduced this commune to the first Chambre of communes in 1817 was Georges Mallet.

•Les Côteaux gave birth to General Laurent Férou, one of the signatories of the act of the Independence of Haiti; he was born on the Pinet habitation.

•To the east is the Karata, a position admirably defended in 1803 by the natives against the French troops, and where, on October 8, 1806, Messeroux gave the signal for the insurrection against Dessalines.

The city center and the Damassin district are coastal and their predominant relief is the plain. The communal sections are all inland areas that sit in the hills. The climate is normal throughout the commune. The inhabitants of the commune call themselves Côtelais. 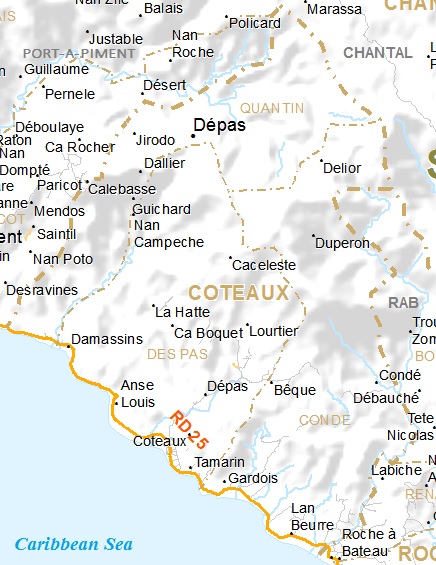 In the town there are schistous rocks, millstones, quartz, and flint.

The commerce of the district of Côteaux has seen recent development. It was necessary to encourage the interesting and hard-working people of this important part of the country. This borough, by its geographical position, is isolated from ports open to foreign trade; in order to facilitate the operation of its dyestuff and others, it was necessary to provide an alternative to reduce the transport costs which are exorbitant by this cabotage. The transport by coastal vessels of large timber, such as mahogany, etc., is recognized as impossible. Port-à-Piment is a central point, which, beside the imported trade, enjoys a port of easy access. For these reasons, the Legislative Body passed a law of October 28, 1885, granting foreign naivres the rights for the export of tincture and other woods at Port-à-Piment. Foreign vessels and others who are going to take their load must make their declaration of entry to the Port of Les Cayes, which is the place open to the nearest foreign trade, and at the exit must take the exit card at the customs office.

Education The Ministry of the National Education of Youth and Sports is represented in the municipality by the main District. Two kindergarten, several primary schools and one secondary school were repertories in the commune. However, there is no form of higher education.

Health The Ministry of Public Health and Population is not represented in the commune. There is, however, a Public Health Clinic and a Private dental clinic.

In terms of its water potential, the municipality has three rivers, five springs, twolagoons, 25 wells and 29 public fountains. The city of Côteaux has a sanitation service and is electrified by a hybrid power plant, using solar and diesel as energy sources. The power supply frequency of the electric current is 35 to 40 hours per week, but rehabilitation efforts seek to increase this amount to 15 hours per day.

From the administrative and judicial point of view, there are two courts of peace. There is no prison in the commune. The garrison of the commune consists of an administrative police company of the 34th regiment of infantry line, the National Guard on foot and on horseback, the rural police and a company of artillery of Les Cayes.

The municipality has ten Catholic churches (including chapels), three Baptist churches, an Adventist Church, ten Pentecostal churches and a Kingdom Hall of the Jehovah's Witness.

When it comes to spirituality and religion, most of the 20,000 population of Coteaux are Catholics. They go and pray at the St. Peters Catholic Church, which has been around since 1727. The state donated $1,000 to the church in 1892. The Patronal feast is celebrated on June 29. The priest of the Coteaux worked to put his parsonage at the end. Though many are Catholic believers, there are also residents who are Protestants and who follow and practice Vodun.

The municipality has no political parties, but twenty-five professional peasant groups and and three popular organizations are listed there.

As for Leisure, a library, two theatre halls, and three football (soccer) fields have been inventoried in the municipality. There are also several tourist sites, one of which is public and the other historical.

Leading to the summit of the Mountain Goave, the "500 Steps", dedicated to the Virgin Mary, have become a popular pilgrimage site where thousands of pilgrims and tourists flock to these stairs to satisfy their spiritual needs.

This graceful site was built by Aurel Exama in 2000 following an interior locution that recommended him to dedicate his life to the Virgin Mary. His determination became so strong and faithful that he decided to use his own assets and family support to bring this project to life. A statue of the Virgin Mary beautifully nestled in a sanctuary as well as a huge bronze cross just steps away from the shrine await all visitors who are able to reach the last stairs after posing for the rosary along some of the stairs.

Coteaux, the other end of Haiti [3]

Add a photo to this gallery
Retrieved from "https://haiti.fandom.com/wiki/C%C3%B4teaux?oldid=24344"
Community content is available under CC-BY-SA unless otherwise noted.