Belladère, Centre, Haiti borders the city of Comendador, Elías Piña, Dominican Republic, and is Haiti's largest international border community. The eastern terminus of Route Departmentale 301 is located in Belladère at the Haiti-Dominican border; the highway continues east into the Dominican Republic as D.R. National Highway 2.

Belladère is home to an international port of entry, the Carrizal Port of Entry.

Due to its location on the border and its major ports of entry, Belladère funnels an estimated $96 million worth of international trade into Haiti and D.R. per year, in fresh produce, beverages, animals, oils, cereals, minerals, and materials.

Inaugurated in 1948, Belladère was built on a very pleasant site located at almost 400m (1,312 ft) altitude, in the middle of the countryside. It stretches from east to west on the crest line of a hill overlooking the valley agricultural district of Grande-Plaine. A chronicler of the time decribes Belladère as "beautiful and immaculate".

Belladère has a tropical climate, which has much less rainfall in winter than in summer. This climate is considered to be Aw according to the Köppen-Geiger climate classification. In the winter months, Belladère averages in the mid to upper 60s (20°C), with January averaging daily highs of around 76°F or 23.1 °C. Lows typically settle just below 20°C on a majority of nights, but it is not uncommon to see temperatures tumble below 50°F or 10°C on some winter nights.

On the other hand, in the summer months, highs average around 79.7°F (26.5 °C), with the month of August being the hottest with an average daytime high of 80°F or 27°C. Nighttime lows for the summer months remain in the upper 60s (20°C) for the duration of the season. The rainy season generally runs through April and October, and these months typically see six inches 146mm or more of combined rainfall, which brings the average annual precipitation for Belladère to about 4.8 inches or 123 millimetres. Flooding is rare throughout the commune of Belladère, although it's 3rd section Riarbes is prone to landslides.

The name "Belladère" is derived from the Spanish word for "to guard" or "to post." Its name, definitely of Spanish origin, refers to an outpost that stood in the mountain pass where Belladère is located.

In 1889, a decree from the provisional government of September 4, 1889 established Vella-Dera as a village of Las Cahobas. Following the civil war in 1889, Belladère almost became a part of the Dominican Republic, as the Dominicans tried to establish themselves there, until President Hippolyte restored order.

In 1910, according to historian Banan Sospwa, the government ordered foundation of a district, separating Belladère, Haiti from the city of Las Cahobas. The municipal charter of 1948 granted the settlement elevation to the rank of commune.

The economy of Belladère is heavily dependent on the cross-border trade through its Port of Entry mainly by produce distributors and small retailers in Belladère, Haiti and throughout the rest of the Dominican state of Elias Piña. Most of Belladère's economy is based on agribusiness and commerce, but in terms of economic and financial Infrastructures, the municipality is very poorly equipped. It has only one hotel, two restaurants and a marketing cooperative. Despite its small population, Comendador actually receives much patronage from its bordering sister city Belladère. Most observers guess the population of Comendador at roughly 45,000. International commerce is a big part of Belladère's economy. More than 60 percent of Belladère's’ goods comes from the estimated 30,000 shoppers crossing the border daily. Within the informal framework of these markets, Haitians and Dominicans are able to move in both directions across the border, typically during two specified days each week, without passport or visa requirements, in order to sell goods in a specified area on the other side. In practice, movements predominantly consist of Haitians travelling across to the Dominican side of the border to buy and sell in Dominican markets, perhaps due to the superior infrastructure or the security concerns of Dominicans.

Although agriculture occupies the majority of the inhabitants of the commune, especially in rural areas, technical supervision in the agricultural field is largely lacking. Erosion, caused by mismanagement of resources and accelerated logging in the area, is the main scourge of this sector of activity. The main crops in the town of Belladère are: peas (beans), corn, peanuts (pistachios) and tobacco. These products are sold to communal markets and other municipalities such as: Lascahobas, Port-au-Prince and Savanette, as well as Elias Pinas, in the Dominican Republic. Farmers in Belladère raise coffee, beans, root nuts, and produce in rich and well-irrigated soil. The cityship has a healthy export market, which serves Elias Piña, who relies heavily on Belladère for its fresh products.

The city's market is actually popular among the residents, who are into Belladère's agricultural goods such as coffee, fruits and groundnuts. When it comes to fertile lands, Belladère has a lot to offer. Its fertile land allows its farmers to grow crops and harvest quality agriculture produce.

Former Haiti President Dumarsais Estime established Belladère in 1948, its name is coined from a Spanish word meaning "to guard" or "to post". The city itself has Spanish roots. Considered the crème de la crème of the Central Plateau, its bewitching beauty and proximity to the Dominican-Republic make it an advantageous place for its export market. Elias Piñas, also known as Comendador, is the border-crossing city of the Dominican Republic, over which Haitian day-laborers travel to seek jobs. Transportation means used to cross over include jitney buses, donkey trains, and agriculture export trucks.

Belladère's physical infrastructure is weak. Roads are in terrible condition, and restrict the flow of commerce within and around the commune. The section of road between Belladère and neighboring Las Cahobas is barely drivable. The tread on driver vehicles wears out quickly, provoking constant complaining over the deplorable condition of the roads.

For twenty years, the Ministry of National Education of Youth and Sports is represented in the municipality by a school zone office with a zone inspector as responsible. Concerning schools, one kindergarten and several primary schools, nine public and numerous private were listed. At secondary level there are only two schools, one public and one private. Belladère only has a vocational training center, it does not have a literacy center, nor a university, nor other higher schools.

This commune has an office representing the Ministry of Public Health and Population that was not working at the time of the inventory. A hospital, three dispensaries (two public and one community) and two clinics form the health institutions of the municipality. The staff of these establishments is composed of three doctors, two dentists, three nurses, ten auxiliaries (graduates and trainees), two laboratory technicians and health assistants.

At the level of the administrative and judicial infrastructures, the commune has one police station, two sub-police stations, a court of peace and a registry office.

The municipality has 34 telephone lines of which only four operate in the form of cabins. The postal office exists only by name; belligerents are forced to go to Elias Pinas (Dominican Republic) to send their mail out and use the goodwill of some people or public drivers to send their mail in other municipalities (within the country). The press in all its forms is nonexistent in the commune.

In the field of politics and other organizations, the municipality is not well equipped. It does not have representatives of political parties, but has two grassroots organizations, one women's group, a cooperative and one NGO.

Apart from some areas of play for the practice of football (soccer), the town has no library, no museum, no theater nor cinema. There is a place of pilgrimage in the first communal section which is very popular especially on the day of the celebration of the feast of the patron saint of the municipality which is July 16th. 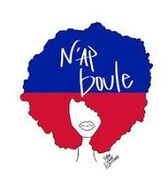 Coffee nursery
Add a photo to this gallery

Retrieved from "https://haiti.fandom.com/wiki/Bellad%C3%A8re?oldid=29762"
Community content is available under CC-BY-SA unless otherwise noted.