Acul-du-Nord, (Kreyòl: Akil dinò) is a commune in the Northern Department of Haiti, located approximately 21 miles (32 km) from Downtown Cap-Haïtien. Founded as Port Saint-Thomas in 1492, it was renamed in the 1650s at the time of the French Occupation. In 1740, it was incorporated as a commune and is the seat of power in the borough of the same name. As of the 2015 census, the city has a population of 55,908 inhabitants.

Acul du Nord's first inhabitants were Taino natives who belonged to the Arawak peoples, a tribe related to the inhabitants of the other islands in the Greater Antilles. The cacicazgo of Marién included the entire northwestern part of Hispaniola, bordered to the north by the Atlantic Ocean, and west by the Windward Passage. The leader, or cacique, of the Marien Tainos was Guacanagaríx, of El Guarico, near the present-day city of Cap-Haïtien. Marien was the first cacicazgo to welcome Christopher Columbus and to convert to Christianity.

The native Tainos, with their intimate knowledge of the land, accommodated settlers in their struggle to survive. In 1492 (December 21) On Saint Thomas's day, Christopher Columbus entered a magnificent bay which he called "Port Saint Thomas". December 22 was the first meeting between Columbus and Guacanagaric, the Chief of Marien. The bay was called Port Camp-Louise by the French until 1740, since when it has been known as the Baie de l'Acul.

• The cultivation of the bastard Indigo or marron was started for the first time, in the 17th century, by a settler resident of this commune.

• Leprosy was reported for the first time in the country, in l'Acul, in 1709.

• On August 22, 1791, at 10 o'clock in the evening, the slaves began to revolt against the French and burned everything, thus giving the signal of the insurrection in the North. They put on their head Jean Francois, who had for lieutenants Boukman and Flaville.

• At the end of 1793, Toussaint-Louverture took possession of l'Acul-du-Nord in the name of Spain.

• In October 1801, during the uprising of Moïse in the Cape, the revolts were pronounced in his favor to the Acul: Christophe marched against them. When he reached the Vaudreuil habitation, he met the vanguard of the revolts heading to the Cape: he attacked and overthrew them.

• In February 1802, at the arrival of the Leclerc expedition, the Hardy Division sailed the Bay of Acul, and marched on the Cape.

Acul-du-Nord has two quartiers and six communal sections. The inhabitants of the town of Acul-du-Nord are called Aculois. For an area of 1.5 square miles (​​4 km2), the town center has a density equal to 7,235 inhabitants per sq mi (2,734 per km2). 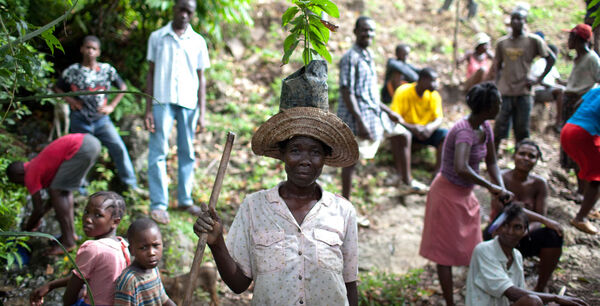 A farmer participates in reforestation activities in Acul du Nord

In terms of economic and financial infrastructure, the municipality is very thinly equipped. Acul-du-Nord is the home of 55,000 Haitians who concentrate on agriculture as their main source of livelihood. The common produce in the municipality are coffee, different kinds of fruits, and rice. Haitians in this region also practice beekeeping for attaining honey and selling this in the local market and in foreign trade.

Trade, livestock and fisheries are also among the main economic activities of the municipality. Commercial establishments are almost non-existent.

With regard to religion, more than forty-eight temples have been listed in the Commune. The number of Churches and Chapels for denominations such as Catholic, Baptist, Adventist, Pentecostal do not exceed ten. The Pentecostal Churches (twenty five in total) represent the most represented faith (in number of temples) in the commune.

The Haitian municipality is marked by its simplicity and hidden beauty. Transportation is a little difficult, with the nearest airport being about 14 kilometres away and Haiti's capital, Port-au-Prince, 130 kilometres away. Despite Acul-du-Nord being off the map and widely unknown to many, it gained media attention in 2010 after violence struck in the municipality amidst the elections. The election polls were forced to cancel after a shoot-out between opposite parties.

The Ministry of National Education of Youth and Sports is represented in the Commune by a school inspection office. Several primary schools have been inventoried at Acul-du-Nord. There are also two secondary schools (one public and one private) and a vocational school. There is no literacy center, university, or other higher school in the Commune.

The Ministry of Public Health and Population is not represented in the Commune. There are three dispensaries, one health center with a bed with two doctors, four nurses, seven assistants, twenty certified matrons and two laboratory technicians.

For water availability, the town of Acul-du-Nord has eight rivers and one source. In addition to these water points, four single boreholes and twelve pumps are used for laundry, beverage, and other domestic services.

Haiti's Electricity (EDH) is the institution that distributes electricity in the northern city of Acul, which is the only electrified zone. It is powered by the power station located in Cap-Haïtien. The frequency is very irregular.

Five Popular Organizations, five peasant groups, two women's groups and one Non-Governmental Organization form the political institutions and other organizations of the Commune.

At the level of the Administrative and Judicial Infrastructures, the commune has a Sub-Commission, four Courts of Peace and four Offices of civil status which do not work very well.

There is no postal service in the municipality.

At the level of Leisure, the situation is not very different. Apart from the football which remains the only sport practiced in the Commune and the eight gagères which work once a week, there is no library, no museum, no theater or cinema, no night club, no dancing restaurant.

Every year, the commune of Acul-du-Nord celebrates several patron saints:

Our Lady of the Nativity (September 8, city of Acul North),

School at Our Lady of Nativity Acul du Nord

Retrieved from "https://haiti.fandom.com/wiki/Acul-du-Nord?oldid=28800"
Community content is available under CC-BY-SA unless otherwise noted.